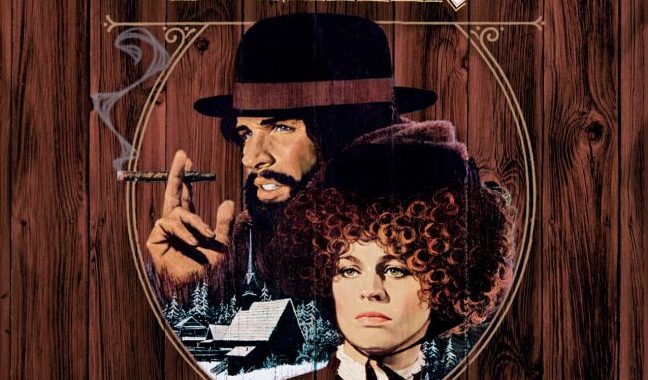 By the 1970s Westerns became more realistic and gave a more naturalistic interpretation of the Old West than say that of the The Three Mesquiteer Western serials of the 1930s or even the romanticised West of John Ford’s films. With the advent of Sergio Leone’s Italian Westerns and The Wild Bunch in 1968 they also became more vioent. By the late 1970s the Western all but disappeared compared to previous years. Much has been written about the frontiersman in Westerns, pitting him against a lawless society as well as the harsh elements, be it the Great Plains and the North American Indian tribes, greedy gold hunters, harsh mountains, bounty hunters or gamblers. All of which has been captured by American cinema.

One film released during this flourish of naturalistic Westerns was Robert Altman’s McCabe and Mrs Miller (1971), now re-released on Warner Brothers dual format Premiun Collection. Altman is in many respects a difficult director to pin down as he tackled different genres and styles. Only later in his career did he begin to adopt a style that could be distinctly his with the big cast ensemble pieces that included The Player (1992), Short Cuts (1993) and Pret-a-Porter (1994). McCabe and Mrs Miller was Altman’s fourth film and his first that tackled the Western as subject matter.

Altman also preferred to shoot on location rather than in a studio for added authenticity. For McCabe and Mrs Miller he, the cast and crew camped out in British Columbia, north of Vancouver in wooded and mountainous terrain. The town of Presbyterian Church was created and built for the film from the timber of the local surrounding woods. The buildings were built as proper functioning dwellings to allow Altman to shoot within the interiors.

Based off a 1959 novel by Edmund McNaughton, the film is set in Washinton State in 1902 when John McCabe (Warren Beatty) arrives in the new town of Presbyterian Church. A gambler, he is somewhat more sophisticated than many of the simple minded miners who live there and rough and ready prostitutes that populate the town of just over 125. A British cockney woman called Constance Miller (Julie Christie) arrives a while later. Between them they become business partners and set up a brothel to protect the girls from the rough and ready makeshift tents they currently operate from. The new brothel is comfortable and warm with a bathhouse and import new prostitutes. After a while the business becomes successful and despite new mining companies moving in, led by the ruthless and violent Sears and Hollander (Michael Murphy and Anthony Holland) there is a threat of violence that threatens to explode if they do not sell up.

Unusual for a film shoot, it was shot in sequence in order that Altman could capture the changing seasons and film the climax in the deep winter snow with the final shot one of cinemas memorable moments. The winter shoot is most definately very atmospheric with further atmosphere provided by the music of Leonard Cohen, in particular his song ‘Winter Lady’ off Cohen’s first 1967 album (where most of the songs come from). The climax of the film, as the snow starts to fall heavily, has a gunfight in the snow that is probably the best since Day of the Outlaw (1959) in terms of winter atmosphere and gun fights and is certainly up there with some of the best Western gunfight climaxes in a film that otherwise might look like Paint Your Wagon (1969) without the songs. The only extras on the disc are the trailer and a short featurette on the filming of this not seen often enough classic.