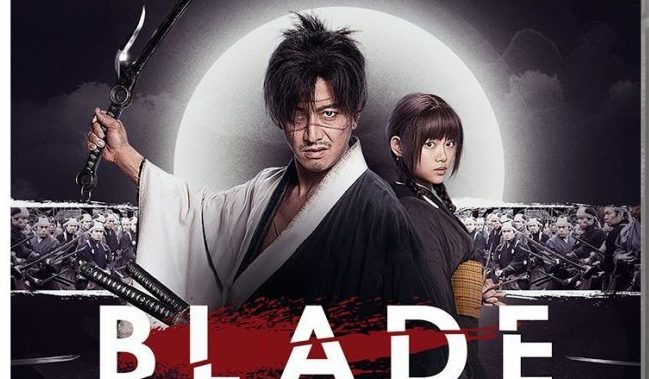 Much has been made in the publicity for Blade of the Immortal (2017) that this is director Taskashi Miike’s 100th film. According to IMDb at any rate. Taskashi Miike came to prominence to western audiences, even notoriety, as the maker of the controversial Audition (1999). Many of Miike’s films are what are known in Japan as V-Cinema, films made direct to video, cheap and often violent. His first film was made in 1991 and has since been a prominent filmmaker while it is not clear whether the IMDb list is complete. This is also the third film Miike has made with British producer Jeremy Thomas, the other two being 13 Assassins (2010) and Hara-Kiri: Death of a Samurai (2011). Significantly all these films are slick samurai films, something western audiences perhaps most associate Japanese films for and have also given the director his broadest distribution, especially as it was distributed by Warner Brothers. Released on Blu-ray and DVD by Arrow Video, the film gets the Arrow’s usual high quality package.

Based off the Manga story by Hiroaki Samura, Miike has self-assuredly captured the style of the graphic novel series. The prologue to the film is shot in black and white and sees Manji (Takuya Kimura) face off a warlord and his samurai army. The warlord kills Manji’s daughter (Hana Sugisaki) prompting the angry Manji to slaughter all 100 samurai and the warlord, leaving a village littered with dead bodies. Manji is left with huge scars and slashes across his face and severed hands and arms. He is visited by an old crone who gives him immortality by filling his damaged bodies with bloodworms. Over 50 years later he is sought by a young woman called Rin (Sugisaki in a dual role) who asks for his assistance in avenging the death of her father. The killers are the notorious Ittō-ryū and agrees to go in pursuit of them, finding their skills difficult to defeat as he is met by them one by one, including an immortal.

There are some precedents to this film. In the 1970s there were the 6 Lone Wolf and Cub series of films and Blade of the Immortal does not feel a million miles from these films and Manga series by Kazuo Koike and Goseki Kojima. In Lone Wolf and Cub a wandering samurai and his baby son face off gangs of samurai and bounty killers and even though he is not an immortal, he has the fighting skills and certainly appears to be unkillable. A human element of Manji in Blade of the Immortal is that he feels the pain of the sword cuts and as time has gone does not have the same skills he had when he took on the 100, until, that is, the stupendous sword wielding climax. As with any good samurai film, the foley whooshs and flashes of the blade are highly audible, with some effective sounds of steel on steel, while the action is well choreographed with some fluid camera movements.

Takashi Miike is an unusual director in that films like this are very slick, while some of his V-Cinema films are cheap and often quite sick, with the look of an underground film; I am thinking primarily of films such as the incestuous cannibal pic Visitor Q (2001). There is a good deal more restraint in Blade of the Immortal. While amputation of limbs and blood is present in liberal quantites, only a couple of times does Miike allow us to see the bloodworms re-generate and join limbs back together. In Manga tradition the Ittō-ryū fighters (as well as Manji) have a curious array of fighting weapons and very modern hairstyles. Kimura, meanwhile, adds a nuanced melancholy to his role.

Released separately on Blu-ray and DVD by Arrow Video, the HD blu-ray (1080p) presentation looks sharp and comes with an audio commentary by Asian cinema expert Tom Mes. Filmed in 2017 at the London Film Festival, there is also an exclusive interview by Arrow Video with Takashi Miike.