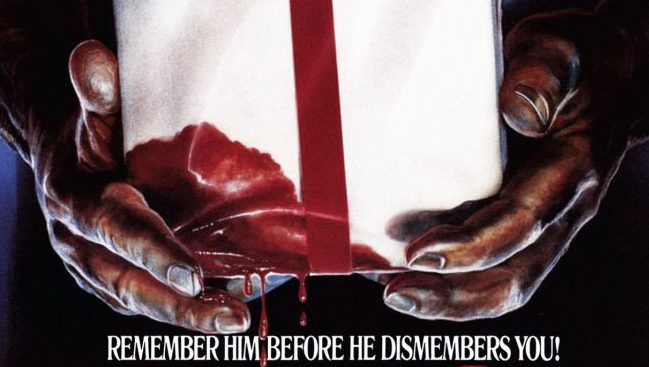 For those who have seen Offerings (1989) it would hardly be a revelation to state that this film is directly influenced by and copied the formula of Halloween, which of course was made some 12 years previous to Offerings, which goes someway to show the long shadow Michael Myers and the franchise cast. Indeed in 1989 the Halloween franchise was already on its 4th film with Halloween 4: The Return of Michael Myers and the Friday the 13th franchise at 8 with Friday the 13th Part VIII: Jason Takes Manhattan, highlighting the slasher film was still on the loose. Never the less, although the seemingly hundreds of slasher films made in America in the 1980s with its limited storylines, few films were as much a direct copy of Halloween as Offerings.

The prologue of Offerings gives more detail to the protagonist’s homelife and upbringing than that of Michael Myers. We first see his trashy and cruel mother controlling the deaf Johnny, she is hardly a role model mother, denying him the best start in life (in contrast to Michael Myers who appeared to have a normal suburban upbringing. Conversely in Rob Zombie’s 2007 remake the young Michael Myer’s family is distinctly trashier). We also get an insight that the not so innocent Johnny is also cruel to animals and the pets around the house. He is mocked by other kids in the neighbourhood with only the young neighbour Gretchen showing any kindness. The other kids taunt young Johnny to walk around a well when he is pushed and left for dead.

Jump forward 10 years (I could tick off all the Halloween similarities, but the number would be too high) and John, now a rather large overweight lad and mysteriously scarred escapes from the mental institution he is being held and we are told has also murdered his mother, but the circumstances are not revealed. John goes after the kids that taunted him and one by one murders them, hides their corpses and cuts off body parts for Gretchen (Loretta Leigh Bowman) as offerings of his love.

There is one aspect where Offerings departs from Halloween and that is its more direct revenge element where he actively targets those who personally taunted him, while not wishing to harm Gretchen. The killings do seem to be relatively tame when compared to some other slashers, until near the end that is. For example when we see a head crushed in a vice, most of this is only seen as a shadow on a wall until it is splashed with claret (the blood looks more like claret than ketchup, so at least it looks as though some budget was put into the film) and naturally John, like every good bogeyman is hard to kill. Where the film is the most like Halloween, other than the story is the obvious faux John Carpenter like score that runs through the film.

This is the 36th title in the Slasher Classics Collection released on Blu-ray by 88 Films. While it is not a quality classic, 88 Films are reviving those films that have long since been forgotten making them once again available to be seen, not only that but as a 2K restoration from the original 16mm negative rather than the old hazy VHS tapes (although in some of the nocturnal scenes this still looks flat). There are no extras other than a wonderfully witty and knowledgeable commentary by The Hysteria Continues Podcast team. In a word, Offerings is a pretty bad film but surely most of those who purchase would be knowing what they are letting themselves in for. Never the less I did almost spit my tea out when one of the characters calls himself Ben Dover.