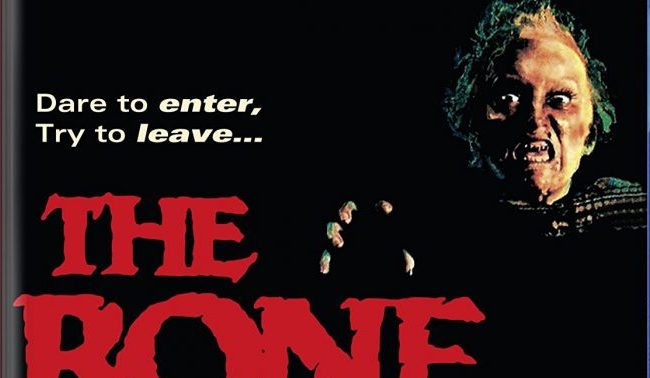 The Bone Yard (1991) was released when the market for horror films was becoming so saturated they were being released at a fast rate direct to VHS. What better label to revive long dead horror films from the VHS age than 88 Films. Although there are other labels, here I am thinking of Arrow Video among a few others who release cult films, 88 Films seem to have cornered a niche market, especially in reviving the modern cult B movie horror films and the classic martial art films of the 1960s and 70s.

This film has all the ingredients that make it a darling of ‘Fangoria’ magazine with it’s mixture of make-up and puppet zombies. This is hardly surprising given that the director, James Cummins was a spfx artist, creature sculptor and make-up artist for horror films, having worked on a number of well known films from the previous decade including John Carpenter’s The Thing (1982), Jaws 3D (1983), Cocoon, House, Enemy Mine (all 1985) and DeepStar Six (1989). The Bone Yard was his first feature in the director’s seat. Unlike Tom Savini, however, his career trajectory did not take off in the same direction.

The main character in the film is a somewhat depressed psychic called Alley Oates (Deborah Rose) still grieving over the death of her daughter. She is invited by police detective Jersey Callum (Ed Nelson) and his partner to use her psychic abilities to investigate the death of three children in the bone yard of the title, referring to the main setting of the film, a mortuary about to close down. The main suspect is the owner of the mortuary and claims that the corpses are mummified demons known in Japanese culture as kyoshi. When the cops and the psychic visit the mortuary that night they become locked in when the three little rotten darlings awake and start chomping on the brains of other corpses before they turn on the staff and visitors to the mortuary.

The production costs were kept down by the majority of the film being set within the mortuary while director Cummins gives himself plenty of opportunity for making creature puppets and gore make-up, even if they are at times of varying quality. Meanwhile the three main ‘child’ zombies or kyoshi are a mixture of puppets and kids in heavy make-up. Sure, as a zombie pic the film works as a homage to George A. Romero and allows some character development in the shape of Rose’s psychic and the attempted suicide girl (Denise Young), while Cummins does not deny himself plenty of opportunity of some blood and guts gore. Never the less, the flesh eating creatures from The Bone Yard are different from Romero’s lumbering corpses, even though they require satisfaction from eating flesh. It would be fair to say the film is as much about demonic possession and beasts as being a zombie feature. There is even comic aside from veteran actress Phyllis Diller as the wonderfully named Miss Poopinplatz, the cranky and rude receptionist who eventually becomes zombified after getting some zombie goo in her mouth; better still her pet poodle becoming a giant zombie with a pink bow (the poodle is included on the alternate reversible sleeve) is a treat.

The disc includes several vintage interviews, including with Diller (complete with a laugh as scary as anything in the film) who has some laughs discussing the film, with producer Richard F. Brophy  and of course with director and spfx guru Cummins (he died in 2010) who both give an interesting insight into the development and making of the film. The commentaries on the film are also provided by the latter pair.