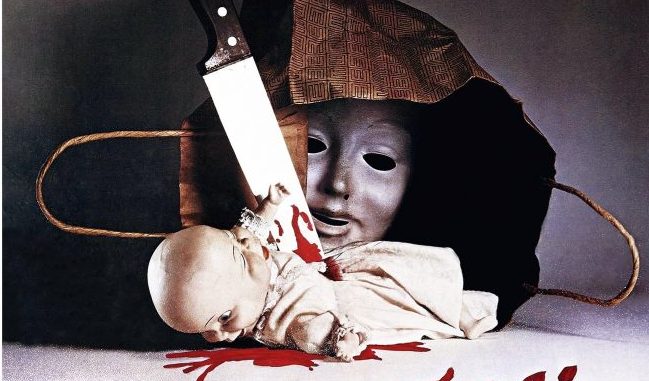 Alice, Sweet Alice (1976) was released under several names including Communion and Holy Terror. The slip case and the title is generally known on the new fantastic release by 88 Films as Alice, Sweet Alice, although the version presented on the disc is for Holy Terror (the disc does give the option for a reversible sleeve). It was originally released in the UK as Communion (as it was also known in some European countries). Released as #35 in the 88 Films Slasher Classics Collection, Alice, Sweet Alice is not only an early slasher, it also came amidst a period of child horror films in the wake of The Exorcist (1973) that also included The Omen (1976). Alice, Sweet Alice is the earliest and most vintage of the films released by 88 Films in their slasher series of films made just a couple of years after the first proper slasher film, Black Christmas (1974) (or Texas Chainsaw Massacre, depends which you want to go with) with its crossover of slasher and possessed children horror films.

It is a film that has divided critics and is not without its controversies. Much was expected of director, Alfred Hole. This was only his second film, the first being the low budget porn film, Deep Sleep (1972). This was not the case and only made a couple of films after Alice. On its release it was not short of its fans in film circles and certainly contains many tropes we’d associate with the slasher genre. Alice was filmed and set in Paterson, New Jersey and set in 1961 when JFK was President. It opens with Catherine Spages (Linda Miller) who visits Father Tom (Rudolph Willrich) with her two daughters, 12-year-old Alice (Paula Sheppard) and 9-year-old Karen (Brooke Shields) who is preparing for her upcoming confirmation. It’s not long before we start understanding that there is something both spiteful and jealous about Alice towards her younger sister, especially with the attention Karen is getting prior to her first holy communion. Alice is not adverse to playing wicked pranks on her sister nor the camp and obese neighbour who lives downstairs from the Spages family. Alice is also known to go round the house dressed in her yellow rainmac from St. Michael’s church wearing a doll mask and terrifying the maid and tenants in the building.

On the day of Karen’s first holy communion she is the last to leave the transept when a figure in a mask and yellow rainmac strangles Karen, puts her body in a trunk and sets fire to it. It’s not long before the finger of blame falls to Alice while her mother is in denial of Alice’s bad behaviour and rage, especially when she later says that she has seen her dead sister and appeared in the communion wearing Karen’s veil. Catherine’s ex-husband Dominick (Niles McMaster) arrives back in time for the funeral and begins investigating himself. Everyone except the parents start to believe that maybe Alice is Karen’s killer, especially Catherine’s sister (Jane Lowry) who clearly does not trust Alice (nor Dominick). A figure in a yellow rainmac and mask attacks the obese neighbour and stabs Catherine’s sister multiple times and puts her in hospital. There is now enough evidence to put Alice in a mental hospital for tests. It’s only when Dominick is kidnapped and murdered that suspicion falls elsewhere.

Much was made in publicity for the film in later years for the support role of Brooke Shields who was 10-years-old when the film was made, yet she is dispatched within the first 10 minutes of the film. The rest of the cast are a mixture of unknowns and interesting inclusions. Sheppard who plays the ever so slightly twisted Alice Spages only appeared in one other film after this, the quirky Liquid Sky (1982) but delivers one of the best performances in the film. There is also Linda Miller who plays the pathologist. She made a number of films in the silent years until she retired from acting in 1933 with this unbelievably her first film since. Other interesting characters include the priest’s housekeeper, Mrs Tredoni played by Mildred Clinton who might jog the memory banks for older Americans as the lady who appeared in Kentucky Fried Chicken commercials. The other of course is Alphonso DeNoble who played the obese cat loving neighbour, apparently a larger than life character himself (he too only appeared in two other films, low budget exploitation horror films at that).

Released by 88 Films in a 2K scan restoration, the new version looks superb and is arguably one of the most interesting releases by the label. A word of note though, that the film will not be released in shops until July 9th but is available direct from 88 Films on their website, www.88films.co.uk. It has the look, and is probably influenced by Italian giallo, including its haunting music score and the stalking killer. It can’t be understated what an influence giallo had on the American slasher movie in style, look and music. This is definately a film worth re-visiting as an example of this. There are plenty of extras on the disc to get stuck into including an audio commentary by director Soles and the film’s editor, Edward Salier as well as an extensive gallery of posters and video covers from around the world as well as a restoration comparison.