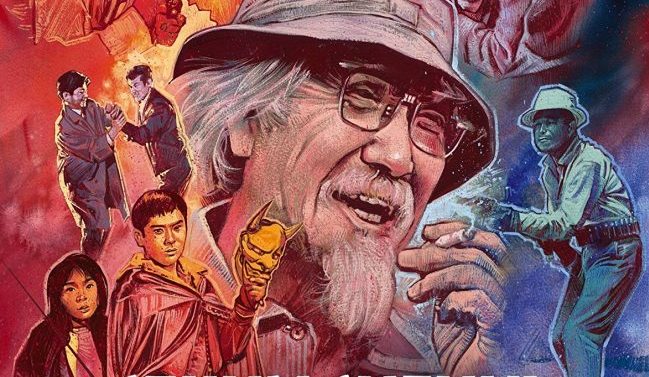 This is the second volume released by Arrow Video of the early films directed by Japanese genre director, Seijun Suzuki. The format is the same as before, a collection of 5 of his early films presented with an introduction to all these films by Asian cinema expert Tony Rayns and cover artwork by the consistently excellent Graham Humphreys.

It is indeed a rare treat for these films to be made available and for most people, even fans of Seijun Suzuki this would be the first time to view the films; in addition this is the first time these films have been made available on home entertainment anywhere in the world outside of Japan. In chronological order the films are: Eight Hours of Terror (1957), The Sleeping Beast Within, Smashing the 0-Line (both 1960), Tokyo Knights and The Man With a Shotgun (both 1961). All the films are a genre type of what became known in as ‘Borderless Action’ films (mukokuseki akushon), following the theme of the Youth films on the first volume. ‘Borderless Action’ means these films are a form of popular B entertainment that borrow themes, a look and style of some the more popular western films that may have come out of such countries as the UK and the USA, films that include crime, action with even some songs that demonstrates an openness hitherto to the rest of the world hitherto little seen in Japanese cinema. These films were churned out in great numbers by Suzuki’s production home of Nikkatsu.

Suzuki was one of the biggest purveyors of ‘Borderless Action’, the earliest of which on the collection is the colourfully titled Eight Hours of Terror and was the director’s 5th film and, according to Rayns, the first worth viewing properly. Compact, in typical B movie style, at 79 minutes the plot follows a group of bus passengers desperate to get to Tokyo, but delayed after a storm has damaged the railway lines. The journey is through trecherous mountain passes and fear strikes into this disparate bunch when they are told two desperate muderous bank robbers are on the loose and inevitably takeover the bus. While not quite like Speed (1994), aspects do resemble the British film, The Runaway Bus (1954).

The next two film are similar in theme and both starred Hiroyuki Nagato as a journalist, but as very different kinds of characters in both films. The first was The Sleeping Beast Within about a girl who becomes concerned about her recently retired father’s disappearance. She recruits the help of her young journalist boyfriend who discovers that her father might be at the centre of a drug smuggling operation operating out of Hong Kong. The next film has similar themes. Smashing the 0-Line continues with the theme of drug smuggling (in itself an anathema in Japan) from Hong Kong; there is a sense in these films that some of the country’s crime ills come from Hong Kong. Both shot in black and white in Cinemascope, these are nice looking films set atmospherically in the port city of Yokohama and not afraid to portray the seedier side of society.

The next film, Tokyo Knights is the oddest. At one moment its very lighthearted with even a musical element to it and at others a serious crime drama. Shot in garish colour, it does feel a little ham-fistedly made but is not without charm or entertainment. The final film, also in colour, was made directly after Tokyo Knights. The Man With a Shotgun, another colourfully titled film is essentially a Japanese version of western. It has all the elements of the western genre: revenge, saloon fights, shoot-outs and a weak sheriff. A stranger (Hideaki Nitani) arrives at a mountainous forest outpost armed with his shotgun looking for work. Most people living here are wild and lawless lumberjacks and he is seeking the person who had raped and murdered his wife approximately a year before.

Thanks to labels such as Arrow, there are now many of Seijun Suzuki’s films now available on DVD and Blu-ray. All the films are fairly compact in length in that they are all under 90 minutes and, although there is only one film that has a commentary (Smashing the 0-Line) and of course there is the ever reliable Tony Rayns giving a great 50 minute introduction to these films there are only a handful of other extras. The releases are restricted to a limited edition of 1,500 so be sure to grab a copy before they run out.