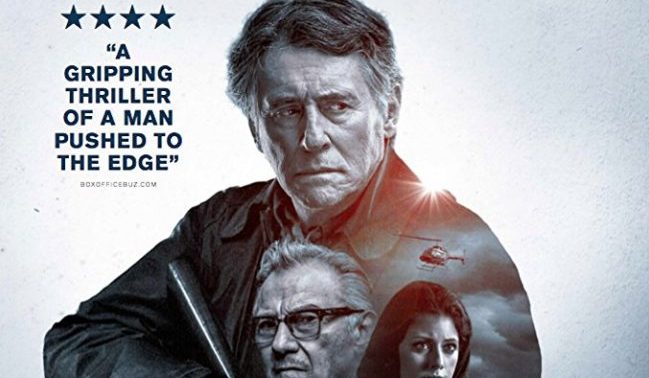 Were it not for the fact this film stars Gabriel Byrne with a cameo from Harvey Keitel (although given the publicity anyone would be forgiven for thinking that he was the star) this sleeper may have passed unnoticed. For the first half of the film, Lies We Tell (2017) is one that is difficult to pigeon-hole and has more than a few surprising twists and turns.

Set in Bradford, West Yorkshire, the film opens with the death of a gangster and a boss (Keitel) who has suddenely died of a heart attack. The story follows the challenge his driver, Donald (Byrne) faces after his boss has passed away. Because the boss, Demi was married, after the funeral very strict instructions have been left for Donald to clear out the apartment and love nest of his mistress, Amber (Sibylla Deen) and destroy every trace of there having been an affair (“the only ones who get caught are the ones who don’t love their wives enough” says Keitel’s Demi/Keitel in a voiceover). When Donald breaks in he is disturbed by Amber returning. From an upper level of the apartment he spies on Amber’s rituals as she gets changed into her sexy lingerie, unaware that her older lover has died. The way the camera follows and studies Amber we are made to feel as a viewer in much the same way as Donald is possibly assuming, that Amber is a high class escort. He surprises her, tells her that Demi has died and that she has an hour to clear everything out. Feeling sorry for her agrees to drive her to her family home.

Amber is not the kind of woman Donald took her for. She is a trainee lawyer from a very strict Muslim family and the request Donald has we learn also suits Amber for her own protection and safety. The family is headed by a patriarchal father but the dominating figure in the family is KD (Jan Uddin), Amber’s cousin, a violent and aggressive individual who was previously married and now divorced from Amber. KD holds a video in his possession of her and Demi in an uncompromising position and is also now set to marry Amber 16-year-old sister. Amber calls on Donald to help her.

This is the first feature from a new director, Mitu Misra who handles the material well. Deen, who plays Amber is an Australian actress best known for appearing in Australia’s long running soap opera, ‘Home and Away’, while the script is co-written by Ewen Glass and to a lesser degree, first time writer Andy McDermott. Glass has also worked as a writer for a TV soap opera, ‘Hollyoaks’ (as was Indian born director Misra). There is something soapy about some of the narrative of the Bradford family drama. The Muslim family aspect does feel a little reductive with many, not least of all the character of KD being reduced to types and in his case the hissing and sneering villain. There are many films over recent years that have highlighted the experience of British Muslims, including Honour, Catch Me Daddy (both 2014) and Honour Killing (2015), all of which have been about shame within the Muslim community. Each of these films, including Lies We Tell, have zealous parents and fanatically dangerous sons and cousins who try to paper over the problems of integration with murder, highlighting the struggle of more progressive Muslims, especially Muslim women. It is Deen’s Amber who is the centre of the film, while Byrne’s Donald, although helping her spends much of the film as an observer.

For a new release and relatively minor film there are plenty of extras on the disc, mostly interviews with the cast and crew (with the exception of Keitel) and in all cases they highlight how central the City of Bradford itself is to the film.