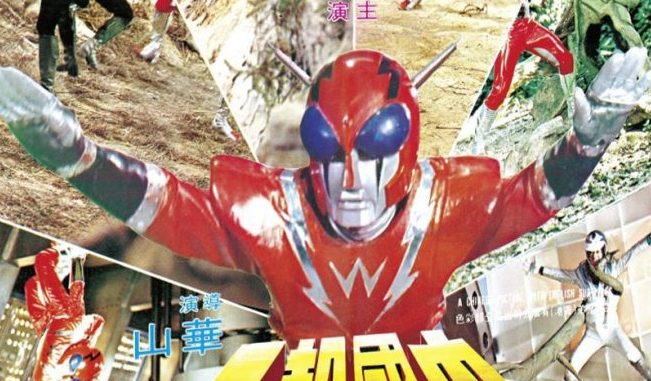 Crazy. Zany. Frankly, nuts. The Shaw Brothers excel themselves with this Superhero fantasy film. The Super Inframan (1975), in the Chinese language titled Zhong guo chao ren, which is translated literally into English as ‘Chinese Superman’. The story is not too dissimilar to any of the Japanese Toho sci-fi fantasy films, or kaiju films. The beginning of the story tells us that it is now 2015 (hold on a minute that’s been and gone) and a volcano eruption leads to the awakening of Demon Princess Elzebub (geddit) awoken after 10 million years of sleep, a meglomaniac bent on devastation and world destruction. Still living as a troglodyte in caves where she has set up her HQ, she raises her skull faced warriors and a bunch of hilarious demons to work for her.

Professor Liu Ying-de has just finished developing his Superhero creation using science and such the like. A science security officer volunteers to be the new Superhero, Inframan and we are told that Inframan gets his energy from the suns rays. Looking like a budget blend of Iron Man and Ant Man in his metal outfit in places it does all feel a bit like an Asian HD mock-up of Be Kind Rewind (2008). True, the costume does look clunky, but Danny Lee as our hero still manages to be fairly adroit in it. Inframan goes to save the professor and his daughter before Elzebub succeeds in her goal of destroying the world before the final kung-fu showdown in which Inframan faces off against the Queen’s hordes and her demonic defendors; kung-fu that is with lasers shooting out of eyes.

The filmmakers well and truly dropped their egos and went for it with this film. Many elements of a typical Shaw Brothers martial-arts action film are in place, but this is essentially a big ball of good fun in proper Power Rangers style. The viewer should also have expectations of what to expect and take it as good natured fun – because it is. To add, I would never normally watch a dubbed version of a film, always preferring the original language version, but could not resist but to watch in the dubbed English. This only added to the enjoyment of the film as we see the hilarious mutant beasts giving their all in the papier-mache and rubber costumes as they get kicked around; how about the crazy guys who fly maces and clubs out of his head and hands?

In the accompanying booklet with the disc, Calum Waddell compares the film to kaiju films in Japan, in other words the hundreds of monster films that came out of Japan to destroy cities that included Godzilla, Rodan and Mothra. Drop borders and this is a great comparison with The Super Inframan as out there as any of these films, if not more so. Recent films from Japan, such as Big Man Japan (2007) has equally bizarre creatures that Big Man Japan must defeat among ruined dwarved cities. While Hong Kong cinema was not as prolific at these type of films as Japan they would also release The Mighty Peking Man (1977), also released by 88 Films. Once again 88 Films need to be praised for the bold, almost brass neck for releasing these forgotten fun classics.