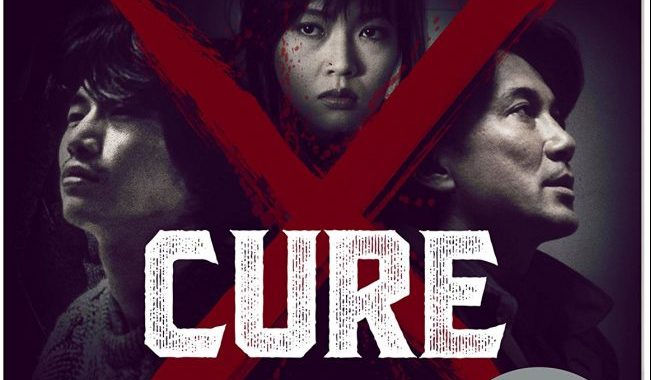 It’s about time Kiyoshi Kurosawa had some recognition. And no, he is not to be confused with the maestro, Akira Kurosawa, director of Seven Samurai (1954), but is a quality director in his own right. His 2008 film Tokyo Sonata did receive some attention and critical praise when it was released. Just over a year ago Eureka! Entertainment released one of his more recent films, Creepy (2016). Both Creepy and his first established horror film, Cure (1997) are released by Eureka! in their Masters of Cinema series. I first saw Cure in Germany several years ago and it was striking that with the popularity of Japanese J-Horror films that this one did not ride the wave in many countries, while pre-dating Ringu by a year; some of the stark imagery from Cure would resonate in the imagination and what an atmosphere the film creates that draws parallels with David Lynch. This in no way demeans Kurosawa’s own unique style as an auteur.

Cure‘s second scene sees a man walking through an underpass at night. Next we see a man arrive back at his apartment where his girlfriend or partner is on the bed, barely seen in silhouette when he suddenely picks up a pipe and brutally clubs her to death with the piping. Enter the police and forensics team, inserting something of the look and style of a David Fincher film. As well as being brutally butchered, a large cross has also been carved into the victim’s neck. They surpisingly find the partner, their chief suspect shivering naked in a riser in the building with apparently no recollection as to what had happened. The police detective, Kenichi Takabe (Koji Yakusho) cuts a rather melancholic figure with a depressive wife at home. A series of other murders and a suicide attempt occur under similar circumstances with many similar traits, leading Takabe along with a psychologist to believe that the murderer is most likely a mesmerist hypnotizing his intended murderers.

This is a film with an abundance of atmosphere and mystery driven by the director’s sense of style. The melancholy of Takabe is mirrored by many of the stark grey toned backdrop of an indiscernible Tokyo. It is no exagguration to read the similarities between Ringu and Cure. In one scene the camera focuses in an upshot underneath Takabe when we see a grimy ceiling turn black and water start coming through in a scene that pre-empts another film by Hideo Nakata, Dark Water (2002); Nakata also directed Ringu. Some of these themes of shadows, a strange unknowable presence, dark patches of light melancholy and sucide Kurosawa would repeat in the truly terrifying 2001 horror film, Pulse, about evil spirits in the internet and the similarly ghostly Retribution (2006), a film long overdue a release in the UK in any format (the same goes for Loft, 2005). Kurosawa’s films are for the most part more subtle than most J-Horror films but the mixture of horror and detective drama clearly has precedents in Hollywood with such films as Silence of the Lambs (1991) or Se7en (1995) to which Kurosawa owes a debt to, as I am sure Hideo Nakata does to Kurosawa.

On the extras there is a talk on the film by horror expert Kim Newman, Eureka! giving acknowledgement to Kurosawa’s place within the horror genre. There are also two interviews with Kurosawa, one from last year that covers his career leading as well as the film itself, as well as a vintage interview with the director.