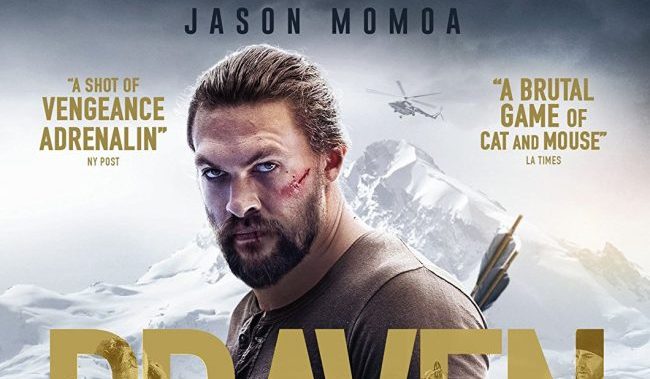 The first thing to say about Braven (2018) is how beautifully shot the landscapes and nature is in the film. In the opening credits the camera glides over the crisp Newfoundland landscapes played out to a moody score, giving the impression that this is going to be a moody indie thriller. What you get instead is your guilty pleasure kind of action movie and a pretty gritty one at that.

Filmed in the wilds of Newfoundland, a logger lives with his wife, daughter and his very macho father (Stephen Lang). The family are concerned that Dad is showing early signs of dementia. Joe Braven (Jason Momoa) is himself a burly macho frontiersman guy and very much a family man. One day he decides to go to the family cabin with his Dad and have a chat with him about Dad’s future. Together they discover a holdall full of bags of cocaine. Joe soon realises that he, his father and his daughter who had also made her way to the cabin against her parents wishes (hiding in her father’s car). Suddenely they all find the cabin surrounded by the ‘owners’ of the drug stash led by the ruthless Kassen (Garrett Dillahunt). Kassen’s men are all crack assassins and killers while Joe and his family find themselves surrounded. Macho Joe and his Dad soon under siege fight back.

Braven acts out as a kind of frontiersman Home Alone as they resort to using violent means to prevent their oppressors from entering. The film is directed by Lin Oeding who, although mostly a director of TV works is best known as a stunt co-ordinator having worked on some 122 movies in this capacity according to IMDb. Viewing the film it’s clear that Oeding takes full advantage of the action in this film among the wintery landscapes. Hawaian American star Momoa is still riding on the wave of his success in the hugely successful ‘Game of Thrones’ TV series (having appeareed in the first two seasons  between 2011-12) and there is a sense that there are number of actors emerging from that show and starting to make names for themselves. Having already played Conan the Barbarian (2011) this film indicates that Momoa is possibly being primed as the new Dwayne Johnson type of action star rather than Steven Seagal.

The acting in the film is okay in this Cliffhanger (1993 which starred Sylvester Stallone) type of action film, if smaller in budget and scale. The dialogue is pretty naff though and Garrett Dillahunt as the chief villain stops just short from being a moustache twirling sadistic villain. The action is violent and often quite bloody and nasty. Nevertheless, it is beautifully shot by Brian Andrew Mendoza who was also a co-producer on the film and would appear to be a Jack of all trades in the industry. While the film shoots above its waist, it for the most pulls it off. Shooting mostly in the wilds of Newfoundland, filming and production clearly had its challenges for all involved, which is glossed over on a couple of the Making Of extras on the disc where cast and crew are also interviewed. Released on 101 Films this is an interesting action film release by the label so watch this space for more films with Jason Momoa for those who like this sort of thing.