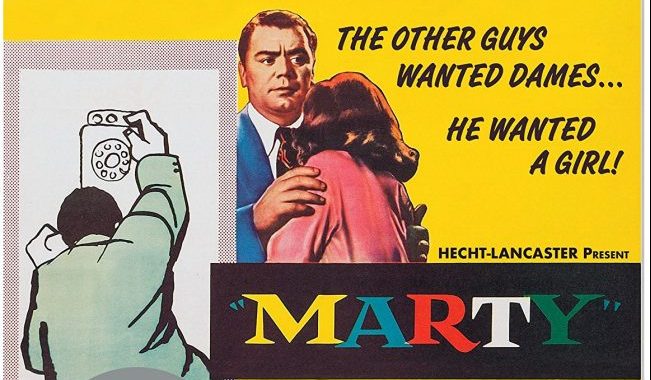 Marty Piletti (Ernest Borgnine) is 34-years-old, single and lives in the Bronx with his Ma (Esther Minciotti). He works as a butcher and has been given first dibs by his boss to buy the business and seeks help and advice. But Marty’s biggest problem that people always remind him of is that he is a bachelor (living among traditional Italian-Americans) and should be married. He is bored of going out with his friends to dance halls and wherever looking for ‘tomatas’ and dames. He has been hurt too many times and, by his own volition is a heavy set fella. One evening he once again finds himself at the Stardust dance hall when he is approached by a man who wants to ditch “the dog” he came with. Shocked at this attitude to women he sees the girl upset and approaches her to talk to. She is a 29-year-old school teacher who seems to have the same bad luck as Marty. Naturally over the course of the film Marty and the girl, Clara (Betsy Blair) traverse the hazards of getting together and finding each other.

Marty (1955) started life as a tele-film, in other words a near feature length play made direct for TV. Directed by Delbert Mann, who directed both the teleplay in 1953 and the film, includes many of the original actors from the TV version. Ernest Borgnine replaced Rod Steiger in playing the lead role. He was deliberately picked for the part by the film’s executive producer, Burt Lancaster who felt that Borgnine, not exactly leading man material, was perfect for the role. He was a heavy set actor and could elicit the right emotional sympathy. Betsy Blair on the other hand, then married to Gene Kelly, replaced Nancy Marchand and was again picked for the part by Lancaster is a slightly more controversial choice. Marchand had masculine features and was ideal for the part of Clara. Blair, however, although she plays the part as a mousy character she is nice looking and a less obvious choice for somene struggling with the kind of derision she receives from other men.

Of course at the time this film was made cinema audiences were starting to dwindle due to the popularity of television as the new home entertainment broadened and took hold, leading Hollywood to find evermore gimmicky ways to get people into the movie theatres: Cinemascope, Technicolor, 3D among other added thrills. Another was to take the talent from television and put them to use in cinema. Mann had already directed extensively for television and this was to be his first feature (and more extraordinarily still earned 4 Oscars, including for Mann as Best Director, Best Picture, Best Actor and Best Writer. Mann would go on to contiune in television but also continued filming adapted plays for cinema, including Middle of the Night (1958) that was also written by the writer of Marty, Paddy Chayefsky. Extraordinary, that in this age of the fight against television that THE Hollywood film of the 1955 Oscars should be adapted from a TV show and an every day drama; clothesline cinema as it became known (an equivalent of what we would call the kitchen sink drama in the UK).

It is Chayefsky’s writing that makes the biggest mark on this film with its realist settings and types on film. The story is universal and while the slang and the dialogue might be of a certain date and time, the story could be of any place. Eureka!’s release in their Classics series is a great package. With a 1080p presentation of the film on Blu-ray, the film’s original poster artwork adorning the cover, this dual format release also includes the original teleplay starring Steiger and Marchand, a short piece about the original teleplay and an informative interview with film scholar Neil Sinyard. A worthy release.