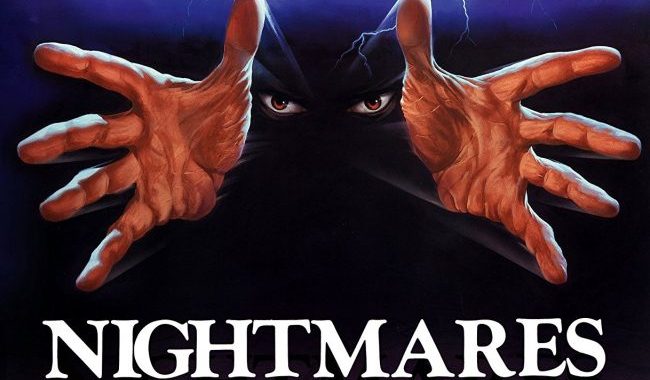 The 1980s was an interesting decade for horror films. Of course there were the biggies such as John Carpenter’s The Thing, Poltergeist (both 1982), An American Werewolf in London (1981) and Hellraiser (1987), as well as all the slasher franchise films. But this was also a decade when VHS (having soon usurped Betamax and Phillips 2000 formats) allowed for the churning out of literally thousands of horror films, one of the most prolific of all genres. One film that went by virtually unnoticed in the UK was the anthology film Nightmares (1983). Of course in Britain anthology films were the bread and butter of Amicus films in the 1970s while the ’80s produced such films as the two Creepshow films (1982 and 1987) and The Twilight Zone (1983, with stories based off the 1959-64 TV show).

101 Films presents Nightmares on DVD and Blu-ray with the cult film’s iconic poster adorning the sleeve with the two hands reaching out from the malevolent eyes in the dark. It opens with B movie film composer Craig Safan’s score leaving the viewer under no doubt that this is a suspense horror film. The film is split into four short stories with the only tenuous link between them being that they are based off urban legends, the first probably being the best known (in fact the later film, Urban Legends, 1998 would follow this theme). The first story is a straight slasher called ‘Terror in Topanga’. The story is set over one stormy night as a lunatic is terrorizing a Californian town having escaped from the local mental institution. While the story comes across on the news, the husband tells his wife (Cristina Raines) not to go out, but of course she refuses and takes the long canyon ride out to a store to buy cigarettes. Naturally her bravado soon turns to fear at the general store, then she runs out of petrol and stops at an isolated garage. Well you can guess the rest.

The next story stars a young Emilio Estevez in arguably the worst of the four stories but the one with the biggest budget. Estevez plays a video arcade obsessed youth who finds things become a little realistic in the Battle of Bishop  game he plays. The third story is a satanic killer car type scenario similar to Duel (1971) or The Car (1977). A desert parish priest (Lance Henriksen) loses his faith following a series of halucinations and after the violent death of a young boy and decides to quit the priesthood and leave the parish. While driving through the desert he becomes aggressively harassed by a black pick-up truck with black out windows with the vehicle or driver of the vehicle clearly trying to kill him. The final story, ‘Night of the Rat’ returns again to suburbia in which a housewife (Veronica Cartwright) and daughter are threatened by a giant rat that. According to the well read pest controller (played by Albert Hague, best known as the Santa Claus lookalike teacher in Fame, 1980) this rat is based off one in an old German legend. After it has mauled the family cat to death, the rat starts tearing up the house, despite the disbelief of her husband (Richard Masur) who seems to somehow have had his masculinity threatened by the interventions of the pest controller.

Short story anthology films are always hit and miss and despite the best efforts of the great genre music this one is most definately hit and miss. Nightmares was intended as a pilot for a TV series by NBC and was intended to be of ‘The Twilight Zone’ variety but was considered too violent for TV but Universal took it up as a feature. The director, Joseph Sargent had made the original The Taking of Pelham 123 (1974) as well as a whole bunch of TV movies before going on to make a few B movie features in the 1980s. Included on the disc is an interview with Christopher Crowe, co-producer of the film and writer of three of the stories. The credits of much of the principal filmmakers stem from TV and TV movies rather than features and the film pretty much disappeared shortly after it was released. Elements of it are effective, but the some of the special-effects such as the giant rat even looks dated by early 1980s standards.

The film is presented both as widescreen and the full screen (4:3 ratio) versions, the latter is how it’d have looked on the origianal video version. There is also a commentary track by Mondo Digital’s Nathaniel Thompson.