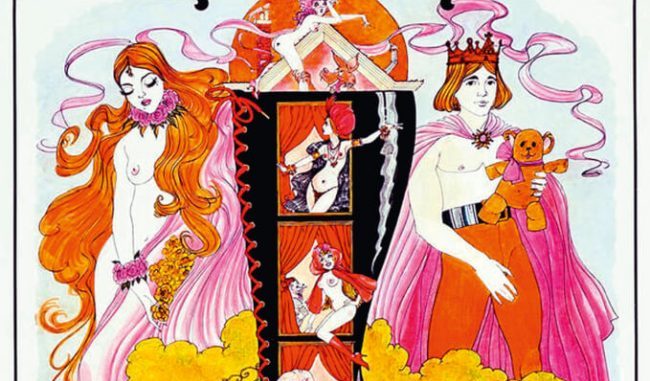 The thin story, or rather excuse for girls to peel off their clothes has a Prince (Don Sparks) reaching the age of 21 and is now of age to break his cherry. The court try a young sexy girl to seduce him, but it’s no good, the lass is not doing it for him. He goes off on his travels and tries to find a virginal girl that can regain his libido and even comes across a sexy and delightful Little Bo Beep (the sexy, busty and curvy Angela Aames who’s first film this was and set her on a brief career before her early death at the age of 32) who of course is in search of her sheep. He ends up in the shoe run by the (not so) old lady, Gussie Gander that is in fact a brothel where a nubile Snow White and her shagged out seven dwarves live. He also meets up with Old King Cole and an amorous Jack and Jill among others.

Not quite a Pasolini Canterbury Tales story, it does have lots of T&A, but a busty boob not a movie doth it make but the format seemed to work in the 1970s. The film looks cheap and barely raises a titter. One funny note though is the jester of the piece, Tommy Tucker (Robert Staats), the doorman to the shoe who sounds more like a character out of a Mel Brooks comedy. But the songs on the film are of course saucy takes on fairy tales and are not bad as musical numbers and songs for such a small comic picture. Another person of note in the film is Martha Reeves of ‘Dancing in the Street’ fame who plays Aunt La Voh. Unlike many of the films released by 88 Films there are few extras on the disc other than a trailer and an audio commentary by screenwriter Frank Ray Perilli and producer Charles Band who give some witty asides to the making of this film even if they can’t remember who half the cast are. However, there does seem to be something of the tragic has-been acts of Woody Allen’s Danny Rose with these characters. The film is also presented in a new HD presentation although it still has some grain and the sleeve is reversible with two versions of original posters.