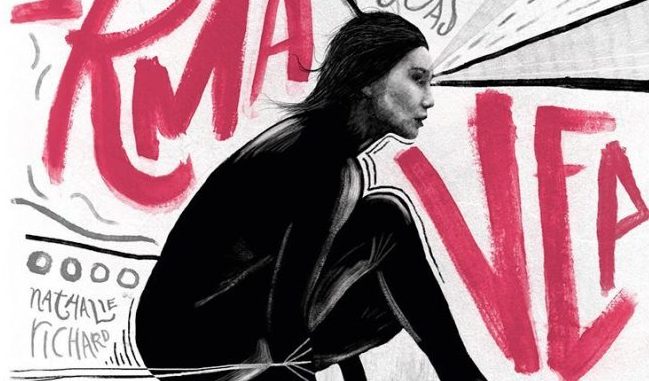 Made in 1996, Irma Vep is an anagram of ‘vampire’. At one point in a black and white silent scene towards the end of the film we see the letters dance about to spell “vampire” out of “Irma Vep”. Olivier Assayas’s film is a tribute to the original Louis Feulliade serial Les Vampires (1915), although for many in the film the cultural reference point seems to be Michelle Pfeiffer’s turn as Catwoman in Batman Returns (1992). The plot of the serial is about a secret black cat suited gang of jewellery thieves known as the vampires. In Assayas’s film about making films his character, director René Vidal (Jean-Pierre Léaud) has invited Hong Kong actress Maggie Cheung (playing herself) to come over to Paris from Hong Kong to appear in the film. Vidal is planning a remake of Les Vampires with Cheung to be in the lead role. The production starts with Maggie being fit for the tight fitting cat suit. She gets to know the cast and crew of the film and in particular befriends the volatile Zoé (Nathalie Richard), the film’s costume designer. She also has to face hostile journalists who proceed to argue with her about the art or lack of art of film. As the film develops and the production gets more intense the meshing of artifice and reality become blurred.

There is much about this film in look, style and feel that is reminiscent of François Truffaut’s Day for Night (La Nuit américaine) (1973) which had British actress Jacqueline Bisset up against relationships and clashes during the production of a film. To make the link closer, Léaud also co-starred in Day for Night and was a regular actor in Truffaut films, having starred in 7 of them, including his first film as a 14-year-old, Les Quatre Cents Coups (1959). Of course there are many other films that have been about the filmmaking process, but few are as close as the comparison between these two. That is not to say that Irma Vep is not original, for as the film develops it ventures further into the realms of what could best be described as arthouse.

With a prolific and busy career in her native Hong Kong, Cheung moved back to Hong Kong after making Irma Vep to appear in what was arguably her best or at least best known film, In the Mood for Love (2000), one of many collaborations she herself made with her regular director, Wong Kar-Wai. Cheung is great here as she acts herself with a good deal of reserve and modesty, with little in the way of any diva behaviour as she tries to assimilate into French culture.

Irma Vep was made on a low budget and is an interesting exploration of being lost in the filmmaking process. It will confound many and will delight others from an intellectual heavyweight director and former writer for ‘Cahiers du cinema’. Extras on the disc include a couple of short films profiling Cheung as well as the black and white isolated film finale. Other extras include interviews with Cheung and Richard and Assayas and fellow ‘Cahiers du cinema’ critic Charles Tesson who between mostly talk about their groundbreaing article on Hong Kong cinema. There is also an on-set location documentary.