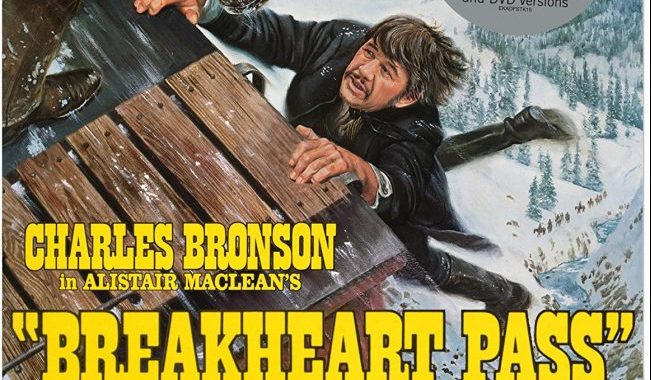 By the mid-1970s the Western genre was winding down following its dominance in Hollywood for so many years, short of a few Westerns by Clint Eastwood that kept the genre ticking over. Another series of films winding down by the mid-1970s were the run of adaptations of Alistair MacLean novels. It started with the war film, The Guns of Navarone (1961) and continued through the decade  and into the ’70s with The Satan Bug (1965), Ice Station Zebra (1968), Where Eagles Dare (1969), Puppet on a Chain (1971) and When Eight Bells Toll (1972) (there was also a smaller film, The Secret Ways, 1961). Anyone growing up in the 1970s would have an Alistair MacLean on their bookshelves (Wilbur Smith can also be added to that list). Breakheart Pass (1975) was one of the last of the run of good films. The films that followed: Golden Rendezvous, Caravan to Vacarres (both 1977), Force 10 From Navarone (1978) and Bear Island (1979) were less satisfying and less fun.

Breakheart Pass was one of the few novels that was a script first and written for the film. As Kim Newman says on an extra on the disc, there is no sub-text or deeper meaning tot he film, but instead represents pure entertainment, like all of MacLean’s stories. There are elements running through Breakheart Pass as there are in most of the aforementioned films: action, suspense, mystery, murder, treachery and duplicity, all under the broad brush strokes of different genres: war, western, Cold War drama, aventure and thriller. Breakheart Pass is almost entirely set on a train, which of course itself, as with any good train thriller, with the action kept moving at a good rate of knots. The story is set in 1871 in the wintery Rocky Mountains with a train that is heading to Fort Humboldt in northern California where a reported diptheria outbreak has broken out. The train has troops on board, Governor Fairchild of Nevada (Richard Crenna) and and his fiancée Marica (Jill Ireland), the daughter of the fort’s commander. Fairchild is transporting medical supplies to the fort. There are also a host of other people on board including U.S. Marshal Pearce (Ben Johnson) who is escorting a wanted man for gambling, cheating and murder, John Deakin (Charles Bronson). Deakin is in fact a government agent who believes that someone on the train is murdering people and smuggling weapons and supplies to rebellious Indians.

The film is peppered with exciting action. And what good discerning action film doesn’t have a fight on top of a train? This one has snow and ice added to the mix as Bronson (or rather at times his obvious stunt double) fighting on top of the train as it rattles over gorges as he fights the cook (played by former champion boxer Archie Moore) in one of many exciting sequences in the film. There is an element here that the story may have been influenced by the critical success of Murder on the Orient Express released the year before. Nevertheless, it comes as no surprise who the chief villain is, but as to who else is involved it keeps its cards close to its chest. Still that does make for a little bit of a mash-up ending.

This film is one of the better Bronson vehicles before his films became very standard action fare. It’s directed by Tom Gries who only directed a handful of films, a couple of which were Westerns: Will Penny (1967) starring Charleton Heston and 100 Rifles (1969) starring Jim Brown and Raquel Welch. Clearly he is able to handle the action well, even if the plot gets a little out of hand in places. The support cast has some of the great American character actors of the 1970s including Crenna, David Huddleston, Charles Durning, Ed Lauter, Bill McKinney and Ben Johnson. Johnson was one of the great underrated Western actors of his generation. He had starred in John Ford’s brilliant Wagonmaster (1950) in which he played the part of a very good substitute for John Wayne. His career really reached a new high when he won an Oscar for Best Supporting Actor in Peter Bogdanovich’s The Last Picture Show (1971). The other is one of the only female actors in the film, Jill Ireland. Ireland appeared in most of Bronson’s films since the early 1970s when he became Mrs. Charles Bronson. Ireland is never a very good actress, but isn’t bad in this film.

Breakheart Pass is splendid action and moves a long at a good pace. Despite it’s raw location shooting the viewer is best to suspend belief. The picture looks great on this release by Eureka Entertainment. The only extra is a 25 minute talk on the film by Kim Newman and a trailer.