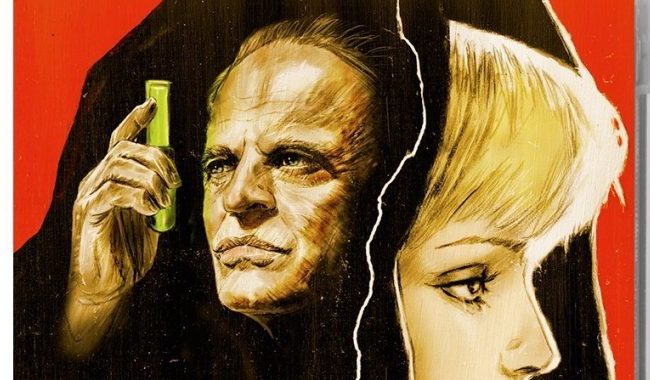 Death Smiles on a Murderer (1973) (released in the English version as Death Smiles at Murder is an unusual film, but one typical of the tradition in Italian horror films since the 1960s. This film is a hybrid of the gothic horror and the giallo thriller. Set at the start of the 20th century and beginning with a recollection of the incestuous relationship between the beautiful young Greta (Ewa Aulin) and her mad jealous hunchbacked brother, Franz (Luciano Rossi). Greta eventually leaves for another man, although we are not yet clearly as to who or what his relevance is to the story. We are then introduced to the von Ravensbruck family who are disturbed when a runaway coach arrives on their estate leading to the coach driver being brutally impaled and a mysterious woman pulled out of the carriage who appears to be suffering from amnesia. The woman in Greta. They care for her and invite a doctor to assist, Dr Sturges (Klaus Kinski). It transpires that Greta had died during childbirth and was brought back to life by her brother Franz using an Ancient Incan method. Other people start to die mysteriously. A love triangle takes places between the Ravenesbruck husband and wife and Greta. The wife becomes jealous and shuts Greta behind a brick wall. But when Greta seems to come back from the grave she continues her revenge.

The problem with Death Smiles on a Murderer is that the plot is very complex and I had to watch it twice to even begin to understand it. Some of the plot elements still remained confused. Nevertheless it is an interesting film. Swedish born actress Ewa Aulin is the film’s star hwho had already made quite a number of films in Italy to this point. She had became an overnight success with the critically hated cult classic, Candy, as well as the smart giallo, Death Laid an Egg (both 1968); the latter film is surely due a long overdue release having recently been restored. She retired from acting within a year of making Death Smiles on a Murderer. An interesting co-star with Aulin is real-life hunchbacked actor Luciano Rossi as Greta’s incestuous brother. According to an interview on the disc with the director, Rossi having appeared mostly in Spaghetti Westerns, eventually went insane and suffered with mental health issues. Not forgetting Klaus Kinski of course who co-stars in the film. Kinski’s role in the film in all likelihood was for marketing purposes and as a name actor to get bums on seats; this normally irascible actor probably knew this as his role does little to drive the plot forward and he is soon killed off.

There are many giallo as well as gothic elements present in the film. It seems to show a great debt to the films of Mario Bava and, as is the case with many of Italian horror films there is plenty of perversion and incest. But there is also plenty of Edgar Allan Poe inserted: cats, a nod to the masked ball in The Masque of the Red Death (1964), not to mention Greta being bricked into a room only for the crime to be exposed by a cat. The giallo element comes with the POV shots, the unusual fish-eyed camera angles and close-ups of eyes (including a needle being inserted into one).

Death Smiles on a Murderer was directed by renowned and infamous prolific sleaze maestro Joe D’Amato (who in this film went under his real name Aristide Massaccesi). D’Amato would later go on to make some of the most controversial films of the late 1970s and 80s, including such outrageous films as the banned Beyond the Darkness (1979), Antropophagus (1980), Absurd (1981) and a number of erotic cannibal and zombie films that border on hardcore pornography. A couple of extras on the disc include D’Amato talking about the film recorded in 1998 before his death the following year. According to IMDb he made just under 200 films. There is also a visual essay on his films and career by Kat Ellinger who discusses some of these darker films by D’Amato. Other extras on the disc include an informed commentary by Tim Lucas, stills and Aulin discussing her career. Death Smiles on a Murderer is an interesting start to the director’s career in the genre, albeit one with a confused plot.