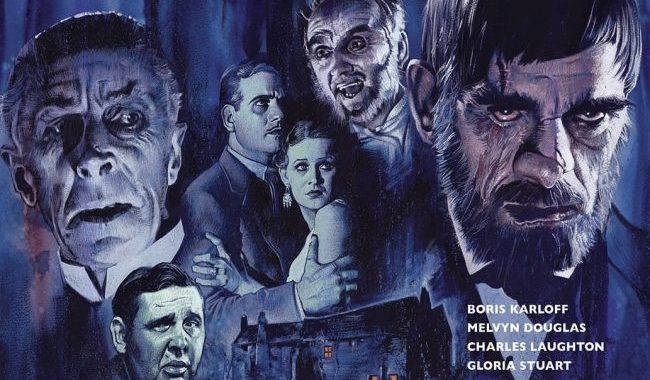 The release of The Old Dark House (1932) has generated much excitement from horror film fans, me included. It has been available to view on home entertainment for a number of years (including a decent release on Kino Video), but this 4K restored version released by Eureka! in their Masters of Cinema series is worth the wait. Based off a novel by J.B. Priestley, this film came on the back of and in the midst of a spate of some of the greatest and best loved horror films of all time. In addition it was directed by James Whale, establishing himself along with Tod Browning as the master of horror film making having already directed the Karloff Frankenstein the year before. This film is literally the film that came to define the old dark house movies. It was not the first as before it there were all sorts of stage and screen versions of The Gorilla and The Bat, as well as The Cat and the Canary, The Terror (both 1927) and The Last Warning (1929) and even Laurel and Hardy muscling in with their short, The Laurel and Hardy Murder Case (1930). As a study on the British at home, this is a local house for local people and not  surprisingly had more than a small influence on ‘The League of Gentlemen’.

Whale has taken the comic and grand guignol elements of Priestley’s novel ‘Benighted’ with this Universal presentation more like a play than an adaptation from a novel (little surprise given that it was adapted by playwrights Benn W. Levy and R.C. Sherriff). It opens with a bickering couple stressed at driving in a storm on a wet mountain road in Wales; I’m sure we can all relate to these fights. They are married couple Philip (Raymond Massey) and Margaret Waverton (Gloria Stuart). They are also with a friend, a man described as a war damaged man of leisure, Penderel (Melvyn Douglas) or as he put it “war generation: slightly soiled”. After they narrowly miss a landslide they fear that the road ahead is too dangerous to travel on. Off the beaten track they see a rather austere looking house in the car’s headlights and decide to stop. Ringing the doorbell we catch the first glimpse of Boris Karloff as Morgan as he half opens the door and we see his scarred face on one of cinema’s most memorable moments. A mute, he grunts and lets them in (“Even Welsh ought not to sound like that!” come the response from Penderel). The interior is a beautifully composed and simply furnished ruin with a large fireplace as the centre-piece, brought to life and detail further in the new restoration.

They are met by the flared nostrils of brilliant camp character actor Ernest Thesiger who introduces himself as Horace Femm (an actor best known for playing Dr. Praetorius in Whale’s The Bride of Frankenstein, 1935). Another of the Femms’ makes herself known, Horace’s sister, Rebecca Femm (Eva Moore), a singularly unfriendly host who insists no one can stay at the house. She looks more like a gypsy fortune teller than a matriarch. She and Horace seem to have very different attitudes, behaviours and morals. He is, in her eyes a degenerate atheist, she a religious zealot. Over the course of the evening, the house is interrupted further by two more travellers, the brash Yorkshire man Sir William Porterhouse (Charles Laughton in his Hollywood debut) and his mistress, a showgirl (Lilian Bond). The Femms’ in no uncertain terms add to the creepiness of the whole affair by informing their guests that two more family members also live in the house, the 102-year-old Sir Roderick Femm (played by a female actress, Elspeth Dudgeon) and the crazy brother Saul (Brember Wills) kept locked in his room.

All the characters in the film are British types and eccentrics with disabilities of one description or another. Douglas, although American, displays that English hero type, Bond is excellent as the flighty mistress, Laughton, a Yorkshire man himself is bold as brass as the self-made industrialist fellow. The Femms’ all have sinister backstories that remain unknown and mysterious. This allows viewers to fill in those backstories with their imagination. The film contains the classic Whale touch in the manner characters enter a scene or a room that really makes this film, all layered with a distinct creepiness. Credit also have to be given to the headline act, Boris Karloff in another ‘monster’ mute role yet still manages to give a great deal of depth and fear to his character.

The story is very simple. Not much happens and everything happens. The creepy atmosphere makes this one of the greatest classic horror films ever made. That the film is with us today is in large thanks to director Curtis Harrington (who made the horror thrillers Games, 1967 and What’s the Matter with Helen?, 1971 among others) who knew Whale personally. He fought for years to get his hands on the negative and his efforts were eventually rewarded in a film that may have otherwise been lost forever. On an extra on the disc, Harrington is able to tell how he did that. There is also, as always, a brilliant and prose like visual essay by David Cairns, three commentaries by Kim Newman and Stephen Jones, one by James Whale biographer, James Curtis and one by none other than the films co-star, the late Gloria Stuart (who may also be familiar to viewers as the old Kate Winslet in Titanic, 1997) and an interview with Karloff’s daughter, Sara. There is also a great stills gallery with many previously unseen production stills and great cover artwork by Graham Humphreys. A treat to be enjoyed over and over again and looks very fresh with the new 4K restored version.