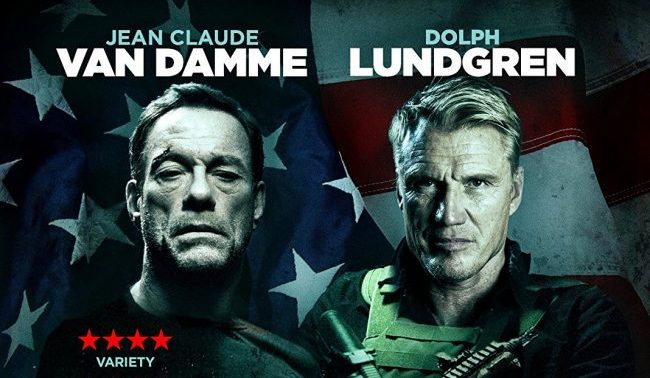 The Black Water in the title of the film refers to Blacksites, secret places where people considered enemies of the government, usually suspected terrorists are taken by special rendition and usually interrogated, usually by CIA or government officials and in some cases tortured to extract information. The blacksite in the new Van Damme action film, Black Water (2018) released by 101 Films, is a submarine deep under the water in the Caribbean in what appears to be a rather spacious large submarine that allows for plenty of cat and mouse action. It contains prison cells and interrogation rooms. This is the latest Jean-Claude Van Damme action film (a truly very prolific action star) which also sees support from Van Damme’s traditional action film rival from the same generation, Dolph Lundgren.

In the film Van Damme plays Wheeler, a well trained CIA agent who to some in the secret service has gone rogue. While he is holed up in a motel he comes under attack from men in black balaclavas and armed with machine guns. He narrowly escapes, but not until his girlfriend (Courtney B. Turk) is killed. He is soon caught a short while later by government boss Ferris (Patrick Kilpatrick) and is put to sleep. He wakes up in a cell and a short while later realises that he is deep under the sea where he is interrogated to the point of torture. Ferris is determined to extract information about secret documents Ferris believes he has. Also present is Wheeler’s former boss Rhodes (Al Sapienza). But when Rhodes kills Ferris it becomes apparent that his old boss is an enemy of the state. Wheeler escapes his imprisonment with a young agent, Cassie Taylor (Jasmine Waltz) who, along with fellow prisoner Marco (Lundgren) attempt to shoot their way off the submarine.

All sound familiar. As well as mirroring many other Van Damme/Lundgren film it all seems a bit like one of the classic ’90s Under Siege (1992) starring that other action He-Man of the decade, Steven Seagal in which Seagal fights off a band of terrorists who have hijacked the ship he is stationed on. If that too all sounds familiar, then that film too was Die Hard on a boat. Between them Van Damme and Lundgren churn out several action films a year, usually released direct to DVD and still have their die hard fans (if you excuse the pun). There comes a point though when both actors have to realise that they are too old at 57-years-old and 60 respectively. In the recent re-boot of the Kickboxer franchise Van Damme is the old master having taken on a young apprentice. Already it is becoming obvious that Van Damme is wearing a hairpiece and his face looks as though it’s being stung by wasps. Mind you his younger female love/feminine interest, Waltz looks only a couple of face lifts away from looking like Mickey Rourke. Nevertheless, what is undeniable is the action is fun and while some of the shootouts are quite unconvincing the action and film moves at a good pace in this first directorial effort from cinematographer Pash Patriki. The film is also let down by some dreadful dialogue, but lets face it we are all here for the crash, bang, wallop action.