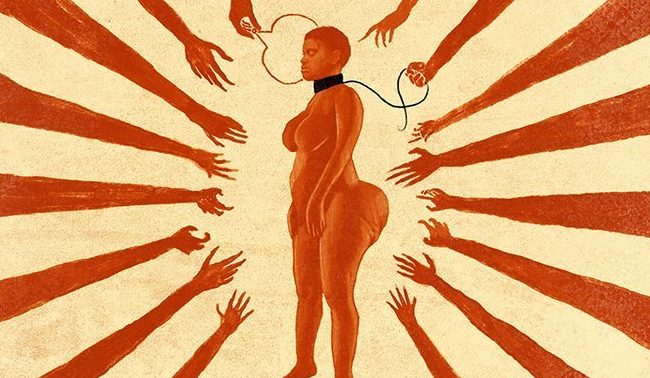 Black Venus was the fifth film for Tunisian born French director Abdelatif Kechiche. Blue is the Warmest Colour (2013) is probably his best known film. Black Venus pre-dated this film and is similar in the manner it tackles difficult political subject matter, here from beginning until its inevitable conclusion. This is not to suggest that it in any way deliberately sets out to shock in an exploitative way, but to make an ‘in your face’ statement about the hideous racism against the ‘other’ in Western society from so-called civilised societies. The film doesn’t just make the point with one particular country, but seems to be pointing the finger equally at Britain, France and Austria where the so-called Black Venus Hottentot performs as a sideshow freak.

Set at the turn of the 19th century, the film is the true story of Sara (Saarjite) Baartman (Yahima Torres), a South African bush woman whose extenuated features: large breasts, vagina and extenuated buttocks is used as a sideshow freak where she is exploited by her manager (Andre Jacobs) who pretends to be on Sara’s side and together they are saving money in order that she can return to South Africa. On the stage, the audience is encouraged to touch Sara (which she hates) and she is encouraged to hiss and display animal-like behaviour to the audience while her manager, Caezar plays this up for the stage. These stage shows repeat several times throughout the film and never lose their power to shock. As the plot develops and Sara travels Europe for the same performances her situation begins to deteriate further as she is forced into aristo sex parties, is taken advantage of by Caezar’s friend who sexually uses her. From here he pimps her out as a prostitute. The opening and ending of the film is equally shocking as celebrated surgeon, naturalist and anatomist Georges Cuvier (François Marthouret) studies a cast of Sara and explains this differences in the vagina etc.

It has to be said that Kechiche’s film has gone by under the radar. Maybe distributors didn’t know how to market this film. The racist subject matter of the entire plot, story and dialogue is very strong. Meanwhile, throughout, Torres as Sara, despite not saying much, displays a great deal of dignity and resignation at the abuse she takes. One senses that at some point she’s going to boil over but this never comes. At 162 minutes it is a long film, but an engaging one, despite many moments or scenes of repetitiveness. Watching the film, in many ways resembles David Lynch’s The Elephant Man (1980) in which John Merrick and his deformed body becomes a sideshow freak inspiring equal horror and revulsion. Although Merrick is saved by Dr. Treaves he nevertheless still becomes an exhibit for anatomist and doctor’s to study. Released by Arrow Academy, the only notable extra on the disc, other than a trailer is an appreciation on the films to date of Abdellatif Kechiche by critic Neil Young (no not that Neil Young).