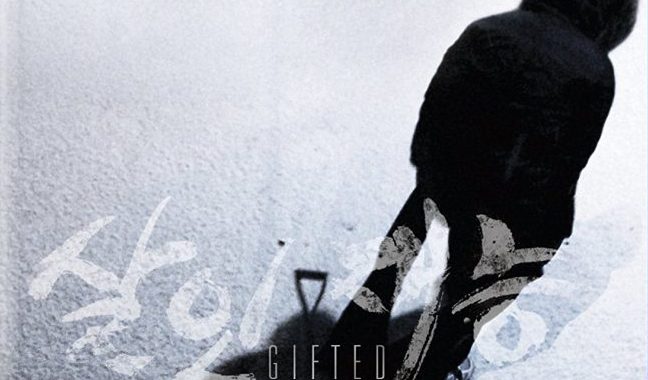 Over the past few years there have been some very good and interesting films coming out of South Korea, proving that the spate of successful horror films and thrillers made in the wake of some films by the likes of Kim Ki-duk prove that this was no flash in the pan. Indeed, there are some fresh talents emerging from this South East Asian country with some of these films being given a release, in many cases for the first time in the UK by 88 Films. Recently they released the excellent Sea Fog (2014), with their latest release a slow burning thriller called Gifted (also 2014).

The film opens with a shot of the main protagonist’s face as he is masturbating while lying on a pile of money. This is rather a lengthy shot and seems to be rather less erotic or exctasy than some kind of struggle or pain. The film then flashes back to the life of the man in question, Min-soo (Beom-jun Kim) and his life with his fiancee Sujin (Junghwa Bae) in the rather sterile white environment of their apartment. What Min-soo doesn’t tell his wife is that he has recently been laid off his job and at present is pretending to go to work. Sujin works in a cafe and is given the first offer by her boss to buy the business from her. She says that she needs to get approval from her husband, which he denies. On the one hand he knows that they will be unable to raise the deposit for the business as he is not working, while on the other hand it becomes apparent that he is something of a control freak over many aspects of their marriage and seems something of a melancholic character. When she does find out that he has lost his job and hadn’t told her, she leaves him.

Now that he is single and without money or work, Min-soo is no longer wearing the white shirt and is wearing scruffier casual clothes. He eventually finds hard work packing chicken meat at a butcher’s (everyone he meets tells him that he stinks of chicken meat). He also takes on a job as a chauffeur for those who are inebriated and require someone to take them home. One of these clients is a former colleague who is drunk and mocks him for how he has fallen. Min-soo stops the car, gets out and strangles the man, disposing of his body. He begins to make a habit of this as the body count rises and as a result begins to enjoy his work, robbing his victims in the process.

All the acredited cast and director are relatively new in the film industry. Writer, director, Jai-hong Juhn had made the critically praised Beautiful (2008) with this just his third feature. Juhn has been able to construct his film in a cool mannered way as we see a man from the beginning, although melancholic turns into a serial killer. His melancholy could easily give way to being psychotic. There is an undercurrent of a hidden underworld in this film, most innocently played out by Sujin’s young brother who so wants to expand his knowledge of criminal behaviour and graduate from stealing mobile phones to order to cars. He seems to hero worship Min-soo when he sees that he is able to break into cars.

The cinematography too, also shot by Juhn is in sharp, almost concrete grey and white tones, demonstrating that he is a very versatile filmmaker. On the Blu-ray transfer here it looks superb. Sadly bereft of extras, the release is beautiful to look at and does have an option for stereo or 5.1 surround sound. 88 Films, please help me expand my love of Asian cinema with more releases like this.