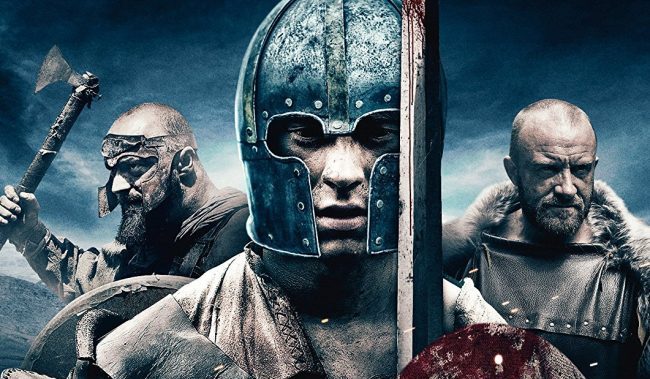 The success of ‘Game of Thrones’ cannot be understated. It is bearing fruit as the progenitor of some fresh new talent. In the case of the new low key historical drama and action film, The Lost Viking (2018) it is the arch villain Ross O’Hennessey, while the main protagonist of the film is Dean Ridge who plays Vitharr, an apprentice Viking warrior who soon learns to survive. Set in the Welsh mountains, Vitharr’s family are massacred in an ambush by rival warriors seeking power. Led by Wyman (Hennessey), his father, little brother and sister and mother killed butchered. He goes on the run and is pursued by Wyman but lays traps and fights back. He is eventually helped by a hermit in a village before he is well enough to try and find his uncle.

Unlucky for Vitharr, he is taken captive by a small Roman unit led by Cassius Dominus (James Groom) who rules over a small amphitheater. Cassius makes his captors fight each other to the death and Vitharr soon becoming his star performer as he takes on and kills all comers. Many of the cast and crew had previously appeared, starred or worked on historical films and shows of this films nature, not least of all Ridge who has starred in the long running TV series ‘Vikings’. Ridge also had a role in last year’s blockbuster Dunkirk. Directed by Emmet Cummins, who also co-wrote the film, this is his second feature. Historically, the Vikings only had small settlements in Wales and this film does give that impression that this is a small community, helping with the scale of the film. It is a gritty and earthy effort with plenty of violent and bloody action. Ridge’s physique belies the action and what he is able to deliver in terms of violence against seemingly bigger and stronger men as he draws on determination and guile. The film is reminiscent and has a similar feel to Valhalla Rising (2009), a film about a Norseman (this time in Scotland) who finds himself in the New World with a similar style and atmosphere.

The film moves between slow brooding drama to the raw violence of the fight sequences, almost without effort. A small film, it none the less gives a good sense of time and place and should appeal at the very least to those who are drawn to shows like ‘Games of Thrones’. There are no extras on the DVD.