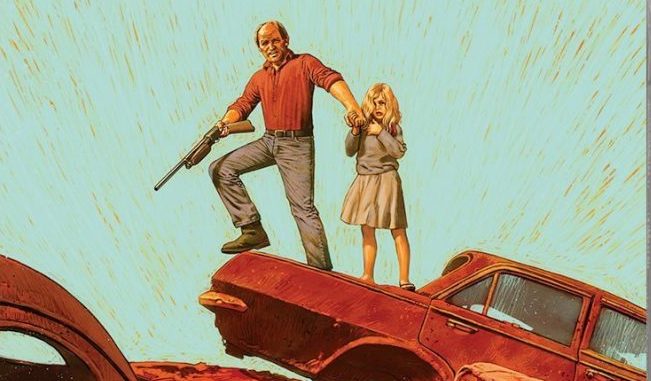 Following the recent release of Sleeping Dogs (1977) by Arrow Academy a couple of weeks ago, Arrow have followed this with another early film by Roger Donaldson, Smash Palace (1981) (following this there will be another 1980s film from New Zealand coming to the shops in the next few weeks through Arrow Academy, Vigil, 1984). These early Kiwi films are very different from the films Donaldson would go on to make in Hollywood: No Way Out (1987), Cocktail (1988), Cadillac Man (1990) and Dante’s Peak (1997) to name a few. Smash Palace is a much smaller film in scale and ambition, but is also a more realistic one than the aforementioned later Donaldson films.

On an extra documentary on the disc, Donaldson explains that the origins of the story came from a story he read after his marriage broke down, making this a very personal film. The story was simply about a man who took his child as hostage and he felt there was a story to tell here and one that he could relate to. The story is a simple one. Al (Bruno Lawrence) is a former racing driver who while racing in Europe met Jacqui (Anna Jemsion), a French girl. After they marry the couple move back to his home in New Zealand to look after his father’s scrap yard after he falls ill. The couple then have a daughter. All this is played out in a brief flashback, piecing together where the origins of these people came from. At the yard Al fixes some of the cars, including a racing car. Jacqui is naturally bored and begging Al to sell so they can move. She is almost pleading with him, until she transfers her affections on to Al’s best friend, local policeman Ray Foley (Keith Aberdein). Of course, eventually Al finds out and is angry and turns no Jacqui. They kind of make up, but Jacqui decides to call it a day on the marriage. This tips Al over the edge, leading him to turn to more extreme measures to get his daughter.

Of course this was very much a part of Donaldson’s apprentice as a filmmaker, but a significant one. It falls very much in with the tradition of Australasian cinema that has a very different aesthetic style than American or European cinema. There is not only an edginess to these films, but that the people in these films are connected to the harsh environment they live in. The characters are all well drawn, the acting is good and above all, realistic. Considering several of them are non-actors credit has to be given to Donaldson for drawing the performances out of them. This includes Greer Robson who plays daughter Georgie who was 9-years-old when the film was made. She would later go on to star in TV work in New Zealand. Not a film well remembered these days, but one worth seeing and certainly one that was a game changer for Donaldson on a personal level. Smash Palace is a film with two edges: in one sense little happens and in another there are scenes of destruction with cars and other potential ones with helicopters and trains galore. One of the films most exhilarating scenes is where Al takes the racing car out for a spin with a POV camera mounted.

Extras on the disc include an almost hour long making of documentary and commentaries by Donaldson and stunt driver Steve Millen given with the number of scenes in the film that involved dangerous scenes with cars.