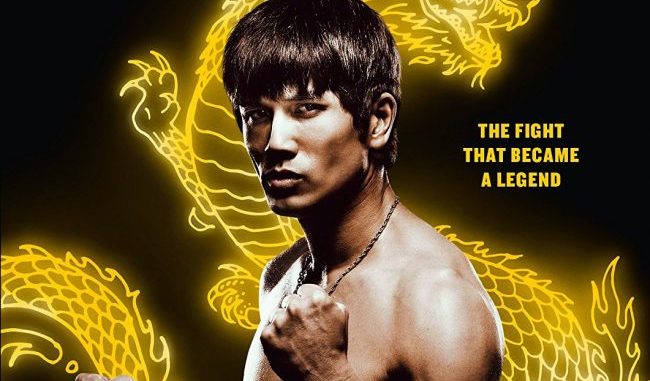 In 1964 there was an alleged legendary fight in San Francisco between Bruce Lee and Wong Jack Man, some 9 years before Lee made the cult classic, Enter the Dragon. It was alleged that Wong was unhappy that Lee was training Westerners in the art of Kung Fu. Birth of the Dragon (2016) opens in a rural China or Hong Kong with Wong taking on all comers as a monk at a Shaolin temple. A short while later he arrives in San Francisco, Fresh Off the Boat we are led to believe. Wong (Xia Yu) takes on a job as a pot washer at a restaurant. When asked if this is demeaning for a Kung-Fu master, he says he came to San Francisco to work and that it is an honest living. It all sounds very Mr. Miyagi.

Meanwhile. Bruce Lee (Philip Ng, himself a martial arts trainer) is working at a gym with his students, mostly Caucasian. One student Lee castigates is the one he grows close to and is his most challenging student, Steve McKee (a bland Billy Magnusson), possibly here alluding to Steve McQueen, who was a student of Lee’s in the late 60s. Nevertheless McKee seems to be trying to meet two ends to the middle as he also becomes a student of Wong’s. Lee is aware of Wong in San Francisco and eventually under pressure the pair set up a fight. Apparently, in actuality Lee beat Wong in a 2 minute fight, but is here stretched out with no clear victor but Wong coming out on top.

One of the problems with the film is it doesn’t know what it’s supposed to be – a biopic or a standard martial arts film. There is still so much hype and myth around Lee that it is easy to make these mistakes. Lee only made four films before his untimely death at the age of 32 in 1973, making him the James Dean of the 1970s. There have been other half assed or semi-attempts at biopic either about Lee or surrounding him, with Dragon: The Bruce Lee Story (1993) and a handful of films about Lee’s trainer, including Ip Man (2008) about Lee’s trainer in Wing Chun, Ip Man 2, The Legend is Born: Ip Man (both 2010) and The Grandmaster (2013). But this film, rightly or wrongly focuses on one moment in time in Lee’s short life.

Nicely shot in places and a very sharp high definition transfer, the film gives a very poor sense of time (although there are some nice San Francisco locations). In some of the fight sequences the soundtrack uses a Nu-Metal soundtrack, then the film remembers where it is and whacks on a Motown song. The fight sequences too have all the exaggeration of any good martial arts film. But the climactic fight in which Lee and Wong join forces against some villains in a Chinese restaurant has some dreadful CGI (check out Lee’s leap from a balcony). Apparently the film was so poorly received that there were some drastic edits made to improve it. This possibly makes it messier. A new release, it is a good to look at film with the only notable extra being a 5 minute interview with Ng.