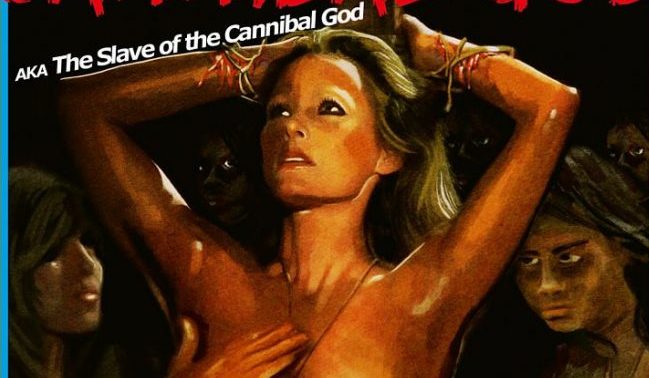 The Mountain of the Cannibal God (1978) Blu-ray Review

Emerging from Italy, there were a spate of  horror exploitation films, a whole new horror sub-genre of films that were simply labelled as cannibal movies. One of the earliest was The Man From Deep River (1972) directed by Italian horror shock maestro Umberto Lenzi. In the late 1970s and early ’80s a whole raft of similar films were released. One of the earliest was The Mountain of the Cannibal God (1978) that, while not the most notorious is perhaps one of the best known. It was notorious for the use of animal and justified allegations of animal abuse in the film (more on this later). It does benefit from starring a couple of A list international stars in Swiss actress Ursula Andress and American Stacy Keach. It was also directed by one of Italy’s great genre directors, Sergio Martini and co-starred a regular actor he used, Claudio Cassinelli.

The story is a fairly simple one that leads us to its inevitable gory finale. On an extra on the disc, Martino states that he took the basic story premise from the 1952 Hollywood film, The Snows of Kilimanjaro which had starred Gregory Peck. It has Susan Stevenson (Andress) arriving in New Guinea with her brother (Antonia Marsina) to look for her brother who went missing on an exploratory mission deep in the jungle, who was himself searching for uranium deposits. I don’t think it’s a necessary for a spoiler alert even at this stage as to what happened to him. They enlist the reluctant help of an old acquaintance of her husband’s, Dr. Foster (Keach). He believes that he must have gone missing at Ra Ra Me Mountain and leads them with porters through the foreboding jungle. On the journey they are met by the dangers of the jungle, which take the lives of a couple of the natives: a tarantula, anacondas, cobras, boa constrictors and alligators. When they come to a friendly village of natives they are met by a Westerner, a hunter called Manolo (Cassinelli). Foster and Manolo are concerned that some of the butchered bodies of the natives mark the return of the tribe of the Pooka, renowned cannibals that live in the mountains. Foster had been held by the Pooka and forced to eat human flesh. The attack and death by a Pooka forces their expulsion from the village when they head via rapids to the mountain and more regular attacks and capture by the cannibal tribe.

Appropriately released on Shameless Screen Entertainment, this notorious film has been released in different edits. Here it is presented in the English language version (although there is an option to see the Italian credits sequence, but no option in Italian) and has been beautifully restored in widescreen (rather than some previous dodgy VHS transfers). There is a disclaimer at the beginning of the film stating that this is an almost complete cut of the film. Martino himself personally supervised the removal of the scenes of animal cruelty in which a monkey is killed among another 5 cuts of animal cruelty. On another extra Martino, making no excuses for filming it, stated that someone wanted to show him something and he just filmed it. Rightly Martino removed this scene. All the gory heads being lopped off, flesh being chewed, severed limbs and intestines remain though. On its release the film was banned in the UK until 2001 and labelled as one of them ‘video nasties’. Since, both here and on other world releases it has been available in different cut versions this one is probably the better one given that it is only the animal cruelty that has been expunged.

The acting is not too shabby either and according to a featurette on the release, Andress was in no way a diva and endured the harsh landscapes doing all her own work. It was filmed in the punishing heat of the jungles of Sri Lanka and Malaysia; Martino was certainly a director who used locations well in his films and barely ever seemed to be in a studio.

For fans of Andress she does get her kit off and is disrobed before being dressed up as a priestess recalls her as Ayesha in She (1965) and more disturbing is greased up with human flesh. Once again Shameless have done themselves proud with this release of a cult cannibal flick. Extras on the disc include an introduction by Martino, an apologia and reason for cutting and even filming the animal cruelty sequences and a 45 minute featurette on the making of the film with interviews with Martino and members of the crew.