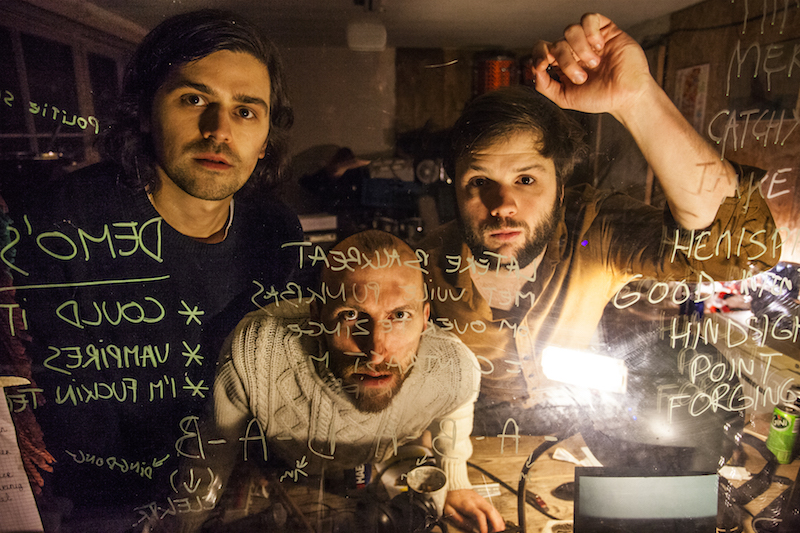 With their debut album ‘Birthmarks’ out now, Belgian punk trio Teen Creeps are sharing a new video for standout track “Hindsight”. The band have also announced a UK tour for this June with shows in London, Glasgow, Stoke, Milton Keynes & Brighton.

The audio for “Hindsight’ was released some time ago, but now there is also a video to go with it. “It’s by far the most poppy song we have ever written. So we definitely wanted to do a video for this one. It just took some more time than the other ones”, says guitarist Joram De Bock.

For “Sidenote” they made a friend dance in front of a camera and the video for “Mercury” was made using family footage. This time they worked with an actual director, camera man and an actress. “So you could say this time it’s a “real” video”, says drummer Ramses Van den Eede.

The band joined forces with Jan Tillon and Patrick Van Den Storme, who also made the video for ‘The Point’ back in 2015. “We just know them from our favourite bar in Ghent, but they are actually both professionals. And since last time was so much fun, we kept saying we had to do another video together.”

The album cover for ‘Birthmarks’ literally comes to life in the new video. A girl wearing the mask from the artwork plays the main character. Singer-bassist Bert Vliegen: “We thought it would be fun to have the mask return. As a point of recognition, but also because the image fits the song. There’s a lot of dynamics going on: from sweet falsetto vocals and clean guitars to a lot of heavy distortion and shouting. Just like the creepy mask contrasts with the young girl wearing it.”

The girl is played by Maaike Somers, a young actress from Belgium. In the video she is getting ready to go out by putting on her make-up, getting dressed and… putting on the werewolf mask. She becomes someone else and she goes out to. She drifts around aimlessly, in desperate need of a connection. She ends up finding one with the band.