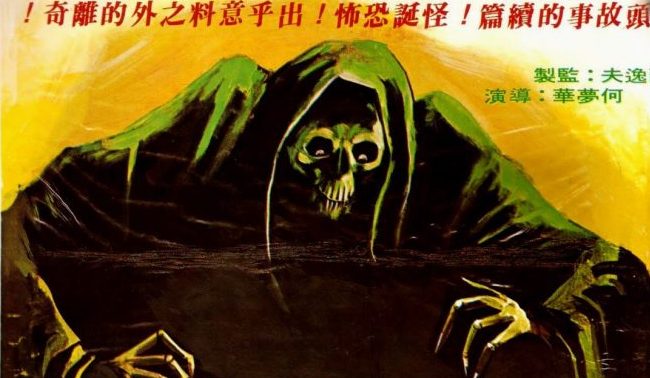 Forget what you thought about Italian zombie horror movies and the likes of Lucio Fulci as the originator of splatter zombie movies with all their flesh dripping, worms devouring flesh, decaying flesh and wot not. Released by 88 Films in their Asia Collection, Black Magic 2 (1976) (directed by genre director, Meng Hua Ho, credited in the film as Horace Mengwa) dispels the idea that the Italians were originated the gross out zombie movie. It is a proper horror genre film that was made and put into production to cash in on the previous years Black Magic (1975) (also released by 88 Films). Black Magic 2 is stand-alone, but it does help to see the first film (also directed by Hua Ho) before this one.

The story centres on its protagonist, Kang Cong (no, he’s not a big hairy ape) who is over 80 years-old and uses black magic to raise people from the dead while the boob milk of his female victims keep him alive and looking half his age. People pay him to cast spells and get what they want. He also has an army of zombies for his protection that he is able to ‘de-commission’ by pulling a large nail from their head with a pair of pliers. When one of a group of four doctor friends is seduced by Cang he hangs a dead animal in her back garden, puts her in a trance, kidnaps her, has his wicked way with her and makes her into his slave. She keeps his youth with her boob milk and then zombifies her. She returns to her friends who are sceptical that there is black magic involved. They hatch a plan to request for Cang to put another in their party under his spell for $1,000 by putting one of themselves up as bait. When they do they find they have bit off more than they can chew.

The plot can be a little confused at times and draws on a number of sources. The film also has a very ’70’s feel to it with its funky soundtrack and urban setting (it was filmed in Singapore) while the plot feels like an old fashioned Hollywood B movie that might have starred John Carradine or George Zucco, but with the modern horror of an Italian horror movie. It has a great array of mumbo-jumbo voodoo in it. Best of all is the spell Cang puts Margaret under in order to retain his youth. He requires hair from her for the potion and collects the hair from her ‘down below’ hair (where else), puts it in a potion causing her to lactate while still under a spell. The milk keeps him young after he has also given her one.

The film is also surprisingly gory for 1976, although the blood still looks a little too much like red paint in places. Yet the addition of wriggly worms under flesh is a little gut wrenching and was done way before Fulci’s Zombie – Flesh Eaters (1979). In Calum Wadell’s insightful accompanying inner notes he makes much of how this film was ahead of its day when the late 70s and 80s were awash with zombie and cannibal films from Italy. The picture on the film is high quality with nice colours while available in Cantonese and dubbed English soundtracks. There is also a commentary track by writer Ian Jane as well as a reversible sleeve in a fantastically enjoyable film. Just go with it.