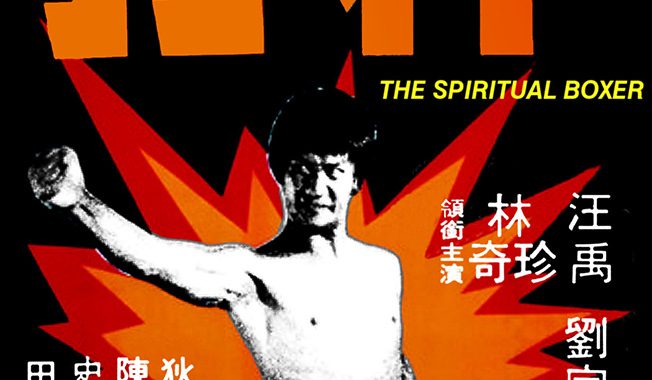 It was the nationalist Japanese boxer belief that through their spirituality they could beat off knives and bullets. This sounds like the perfect set-up for a Hong Kong Shaw Brothers film and indeed the opening of the film demonstrates this in which we see a demonstration by the fighters fighting off all comers including knives and swords to the chest. The film opens by saying that during the Qing Dynasty spiritual boxers believed that they were impervious to bullets and knives. The action then moves to the early 20th century and our hero of the film, Hsiao Chen (Yue Wong) who wanders the street. He is a con-man who boasts he is a spiritual boxer and demonstrates it to villagers in order to con money out of them and tells them he is a Monkey God. This is all fine for the flippant Hsiao but when the village is under threat by a corrupt gang and ask for his help to defend them setting up of course for the finale fight.

The Spiritual Boxer (1975) was the 2nd film from director Chia-Liang Liu who would go on to make Drunken Master (1978), a key early film starring Jackie Chan. Some of the tone of that film is found in The Spiritual Boxer with its wit and even slapstick action sequences. The fight sequences are well put together with some long takes with Yue Wong presenting some pretty good comedy for the part. He himself was not really a martial artist, unlike many in martial arts cinema does lack some of the charisma of other stars from Hong Kong.

It is a fun film, but lacks much of the style and even violence of many Shaw Brothers films from the period, especially those from the likes of Meng Hua Ho or Cheh Chang. Of course, as with any martial arts films it has silly over the top foley sounds of whooshing blades, arms and cracks to body and face. And again, as with most of these types of films the foley work verges on parody. But at least it is a comedy.

The film looks great in its restored HD transfer this is a worthy addition to 88 Films Asia Collection. It is not an important film in the story of Hong Kong martial arts cinema, only in that it was the first major feature for Chia-Liang Liu before he went on to enjoy a distinguished career starting with the aforementioned Drunken Master and The 36th Chamber of Shaolin (both 1978). Prior to this film he had been an actor himself as well as stuntman. The film is wonderfully packaged like other releases by 88 Films in the collection. It come with a limited edition slip-case, a reversible sleeve and expert sleeve notes by Calum Wadell. There is also an in-depth commentary by Asia film expert David West.