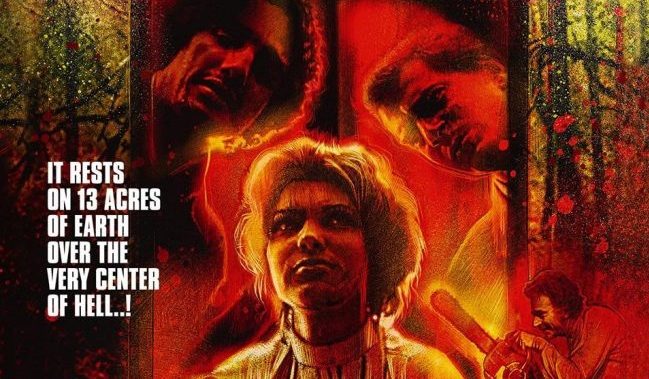 Wes Craven was one of the most iconic of horror film makers of the past 50 years. After all he made such cult classics as The Hills Have Eyes (1977) as well as such cineplex classics as the A Nightmare on Elm Street and Scream films. He also made plenty of duds throughout his career too. He was not a director who studied his craft and pretty much started by turning a hobby into a career as a film maker. From the start he worked with another aspiring film maker, Sean S. Cunningham and between them they directly went out to shock. Time again, as evidenced on the archived extras on the disc, Craven was aware of the nightly horrific footage of the Vietnam War coming across the TV screens and set out to transfer those onto the big screen.

He began by writing something and presented it to Cunningham with the finished result a script called ‘Night of Vengeance’. Craven and Cunningham were deliberately out to shock and upset. What they found with the script and the making of the film is that they even shocked themselves. Be under no doubt the film looks cheap and nasty adding to its horror. The film opens with the birthday of 17-year-old Mari (Sandra Peabody) in the comfortable country house of her parents. She is getting ready to go out to a rock concert with her friend. Her parents are clearly loving but tell her that they don’t really approve of her hanging out with her friend. They head to the big city where they try to score some drugs and end up in the den of Krug (David A. Hess) and his gang of runaway psychopaths.

The girls are kidnapped by the three men and a woman and taken to the country (actually just outside the home of Mari’s parents, which was filmed at Cunningham’s own parents house). They are brutally raped and tortured before being murdered and disembowled. The gang take shelter in the home of Mari’s parents having ‘broken’ down in their car. When overnight, having been welcomed by the middle-aged couple, they realise that these people might have murdered their daughter and friend and set in motion a plan to enact their own revenge.

If the plot seems familiar to cineastes, that is because Craven based the plot off Ingmar Bergman’s The Virgin Spring (1960) which is a similar tale based off a folk tale from the Medieval Period. If the plot and finished product seems disturbing, the story of the Making Of is equally disturbing with the crew not really knowing what they were doing, Hess being deliberately provocative to Peabody while the script was worse and even more shocking than what was finally committed to the screen.

This was undoubtedly the sickest, most disturbing and controversial film of the decade, even more so than those of Herschell Gordon Lewis in whose films the blood and guts never looked realistic and the acting was so incredibly bad that any sense of realism or credibility disappeared. While there are no Oscar winning performances in Last House on the Left, the film is both graphic and messed up but has a very disturbing grittiness and of course was made two years before Texas Chainsaw Massacre. The blood and entrails in this films at least seem more realistic than many films made in this period. The film was banned in the UK for many years, until 2002 when up to that point joined the dubious list of so-called video nasties.

The music in the films is very odd and disconcerting, almost a series of folk ballads as in Alice’s Restaurant (1969) all written and performed by David Hess who plays Krug. There is an extra on the disc that even goes into detail with the music. Yes, the film has some poor continuity, is cheap looking and undoubtedly very nasty. Nevertheless, it is in many senses an important film, not merely because it was Craven’s directorial debut, but because it was not only a controversial film but on that dared to make the turn that many would later followed (the relatively nonsensical title would be copied by many a home invasion or horror film, particularly by the Italians).