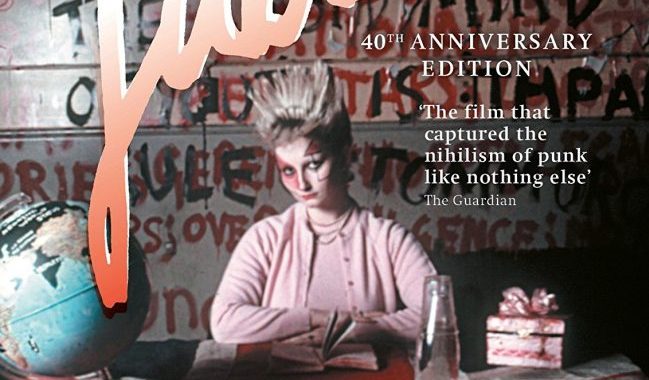 It’s hard to believe that Punk is well over 40 years old, largely heralded by the release of the Sex Pistols ‘Anarchy in the UK’, in the Britain at any rate. Punk meant different thing to different people: to the Sex Pistols and The Clash it was a working-class reaction or counter-reaction, to Malcolm McLaren it was a marketing ploy and to the likes of Vivienne Westwood it was a fashion statement. For art film director Derek Jarman it became an anarchic artistic statement.

Of course Jarman himself was not a punk, but he certainly tapped into the spirit of the age and was even able to insert his own brand of camp into the punk scene with his film Jubilee (1978). The BFI release of Jubilee is released in addition to the BFI’s recent 6 film box-set release, ‘Derek Jarman Volume One: 1972 – 1986’ to observe the films 40 year anniversary.

The narrative of the film is sometimes hard to follow, but makes more statements than having any narrative or even making much in the way of sense. It opens with Queen Elizabeth I (Jenny Runacre) being transported to 1970s London by her occultish aide, Dr. John Dee (Richard O’Brien) and find a place riven with political and social unrest. We are then introduced to some of the key figures in the film: punk girls Mad (Toyah Willcox) and Amyl-Nitrate (Jordan), along with Kid (Adam Ant, real name Stuart Goddard), Crabs (Nell Campbell), Chaos (Hermine Demoriane) and Bod (Runacre again in a dual role). They get up to all sorts in the flat and include killing a one-night stand in a asphyxiation game. All sorts of adventures take place including starting a punk band called Scum while revolt and social unrest, including police brutality increases.

There is an element that does feel as though Jarman is jumping on the punk bandwagon for aesthetic purposes, especially highlighted by Jordan as Britannia singing a faux electro-opera version of ‘Rule Britannia’. Jordan herself is in many ways an icon of punk. She was known to have hung around the Sex Pistols and was a common sight as an employee at Westwood’s SEX shop on the King’s Road. in the film she does her own make-up, wore her own clothes and has her own hairstyle.

Throughout the film much of the acting is poor, over the top and exaggerated while the film doesn’t really hold or gel together. For all its issues it nevertheless is a cult film while Willcox has one of the most forward roles, here in her film debut and is something of a wild cat, coming into her own when in a rage. However, it also has to be put into the context of being a Derek Jarman film and all the arthouse oddities that entails. It was of course criticised by the punks for not being very punk with its less aggressive, artier and even camp aesthetics but somehow today seems to epitomise punk. Westwood’s criticism led her to design a t-shirt that criticised the film. There are also many small parts in the film from well known actors and figures including O’Brien, Ian (Chariots of Fire) Charleson and performances from Siouxsie and the Banshees and Adam Ant, but the film takes the attitude of the times as depressed and shout out to play it louder.

As expected from BFI there are plenty of extras including interviews with Jarman’s friend, Lee Drysdale and Jordan, as well as a short interviews with Willcox. The HD picture quality still has some grain but also has much depth.