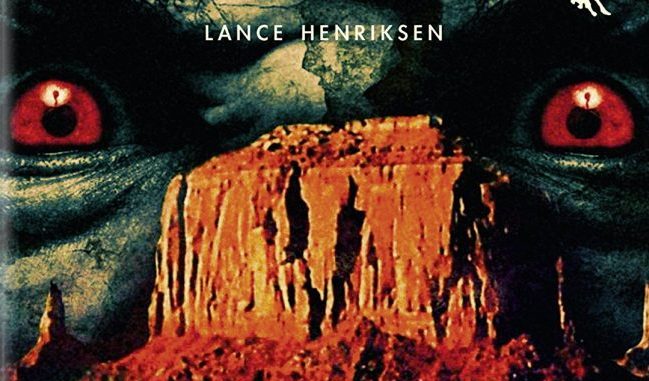 When you attach Wes Craven’s name to a film as a part of the title (Mind Ripper, 1995 is also known as Wes Craven Presents Mind Ripper) you know there is a desperation to get bums on seats or rentals from Blockbuster. The same happened with Wes Craven’s New Nightmare (1994), an A Nightmare on Elm Street sequel and They (2002) also went under the title, Wes Craven Presents They. Of course it can be argued as to whether Wes Craven was a great director or a director of horror films who also made three successful franchises: the A Nightmare on Elm Street films, the Scream franchise or The Hills Have Eyes. In fact Mind Ripper was intended as The Hills Have Eyes III. Of course The Hills Have Eyes (1977) was a huge cult success and led in part by the iconic egg headed Pluto, the member of a desert cannibal family. Michael Berrymen appeared again in the sequel 1984 but did not appear in this proposed third film. It is possible that the story moved too far away from The Hills Have Eyes to be considered a sequel, although the references and similarities are clear.

In Mind Ripper we no longer have the cannibal family but we still have the New Mexico setting. In an underground former nuclear facility in the desert scientists have been experimenting in developing bringing back re-animated bodies in order to create a superman killing machine. They work on a buff suicide corpse called Thor who comes to life. Thor becomes aggressive and starts attacking the crew of the facility. They call Stockton (Lance Henriksen) for help, one of the key scientists who is about to go on vacation with his split family and instead decides to take his family by light place to the desert not realising what he is drawing them into. Meanwhile Thor is mutating into a creature: his eyes go all tiger-like, his ears fall off and has a penis shaped sharp tongue that he uses to poke his victims eyes out. Thor is also showing superhuman strength.

Since Mind Ripper has become a forgotten film. In fact even in 1995 it was a forgotten film destined to be lost among all the other direct to video films released relying only on its ‘Wes Craven Presents’ moniker to invite any curiosity. Yes, as The Hills Have Eyes III: Mind Ripper it may have made more money, but the decision was made to move it too far away from the original two films (well Halloween III: Season of the Witch never really affected the Halloween franchise). Filmed in Bulgaria for a surprising $8 million, Craven was the executive producer of the film, but was produced by Craven’s son, Jonathan who gives a 40 minute interview on the making on the film on a disc extra. It is hard to see where the $8 million went as the film does have an overall cheap shoestring budget look. Jonathan Craven went on to move the legacy of his father Wes forward by helming the remakes of many of Craven’s films. The acting is pretty dreadful and the script awful. However, the special-effects are pretty good even if buff Dan Blom as Thor is ripped long blonde haired stud looking film and makes for a pretty dreadful monster.

Whatever you think of the movie, once again hats off to 88 Films for reviving films such as this and their recent release of The Bone Yard (1990). The transfer looks good and as usual has an interesting booklet sleeve notes by Calum Waddell.