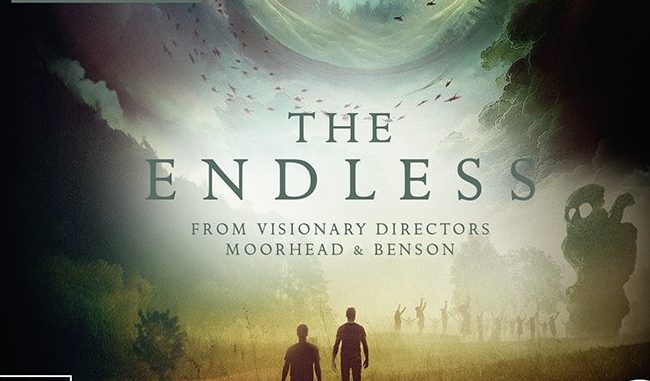 The Endless (2017) is the 2nd feature from the young filmmaking pair of Justin Benson and Aaron Moorehead, following their first film, Resolution (2012) in which it shares many similarities, not least its UFO story line. There are many aspects that link both films, including the cast and crew who are practically the same in both films and in some cases even share the same names (the filmmakers compel the viewers to watch both films). But if this is your introduction to the young pair, then this is an interesting introduction and a mysterious one at that.

We are introduced early on to the main characters of the film, brothers Justin and Aaron Smith (played by Benson and Moorehead) who had previously run away from a dangerous UFO suicide cult group living in the countryside, isolated from civilization some 10 years previously. They have received a cryptic videotape message that seems to suggest that something is going to happen, perhaps a mass suicide in something that they call ‘the ascension’. Seeking closure and out of curiosity they decide to return to the cult and find out for themselves. They suddenly become drawn into the cult again awaiting for the expected mysterious event. At first everything feels warm and friendly and they wonder why they had left, but soon strange phenomena begin to occur: a ball is thrown in the air and does not come down for minutes or a tug of war with a rope into the blackness of the night. Then things become even creepier. While Justin becomes apprehensive and wants to leave, Aaron finds himself drawn back to the group.

Some of the mysterious events have a Donnie Darko feel to them with elements of Looper (2012), Dark Skies (2013) and even District 9 (2009) about it. For the first part of the film it is difficult to read where this film is going to take us and gets more bizarre as it develops moving steadily into science-fiction phenomena. It seems to move almost seamlessly between an intriguing indie thriller to outright sci-fi. The film is made all the better by some believable and more than ever-so-slightly tongue-in-cheek performances by Benson and Moorehead, part of their precocious talent. Here’s hoping for more movies from this talented pair.

For a low budget film that uses its excellent special-effects sparingly it can be a little confused in places but is worth the journey. The extras on the release by Arrow Academy are bountiful including interviews with Messrs. Benson and Moorehead, Making Of documentaries and jokey casting auditions among other curious stuff.