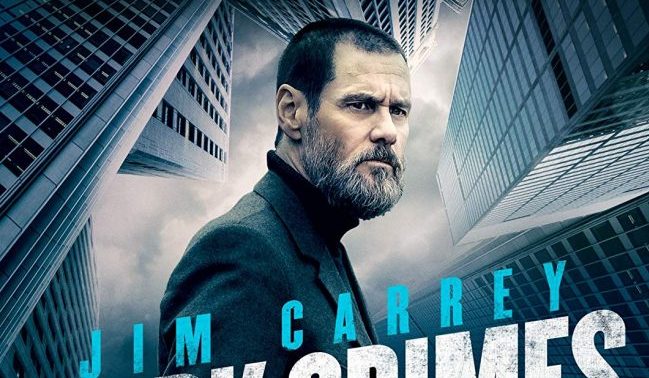 Now, a serious dark neo noir thriller set in a concrete Eastern European city is not what you’d expect a heavily bearded Jim Carrey to appear in. Carrey normally has a face that’d make you laugh, but here he doesn’t even crack a smile. Dark Crimes is an American-Polish drama that tells us it’s based off a true story. The film’s source is a story published in The New Yorker by David Grann, ‘True Crime: A Postmodern Murder Mystery’. A pretty snazzy title. Adapted and written for the screen by Jeremy Brock it is very dark thriller but sadly did not receive a theatrical release here in the UK and only a limited one in the USA.

Filmed in Krakow, Poland Dark Crimes makes full use of the grey communist era buildings, as well as modernist and former, if rundown imperial buildings in the city that focuses on Tadek, a worn out and disgraced detective (Carrey). He pleads with his bosses to let him investigate the unsolved murder of a known unscrupulous character and the similarities to the murder in a recently published novel by an outspoken writer called Kozlow (Marton Csokas). Tadek believes there is a connection between Kozlow, the murder and a notorious underground sex club called The Cage in which clients can, for a price carry out any sexual act or fantasy on the women. Tadek becomes obsessed in pursuing Kozlow and follows him until he believes he has enough on him to make an arrest. Tadek also becomes involved briefly with Kozlow’s partner, Kasia (Charlotte Gainsbourg).

Dark Crimes has almost overwhelmingly been slammed by critics in which the noirish handling of the material, the films pervading darkness and grey tones and noted by many for its vulgarity and crudeness. The opening scene in The Cage is particularly savage, almost exploitative in the way it presents this underground sex club. It’s not even the slow moody pace, that actually suits the film but the way it portrays it. Yet, it does have something. It might not altogether convince or gel particularly well, but individually the performances stand out. Carrey, as already noted stretches his acting capabilities at playing such an unusual role for him. Csokas, meanwhile, has an explosive performance as the accused that he makes full use of. Meanwhile, Gainsbourg appears to resemble some of the self-imposed sexual abuse she received in both volumes of the Nymphomaniac films (2013) taking another share of beatings for sexual kicks.

Released by Signature Entertainment it is one that is worth ignoring the critics and taking a look in at, despite its darkness and flaws.