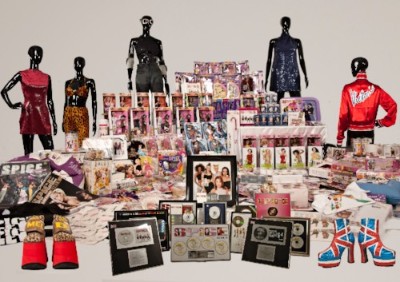 The exhibition’s VIP launch party will take place on Friday 27th July and will be hosted by Made In Chelsea and Celebrity Big Brother star Ashley James. Organiser Alan Smith-Alison states; “Much like the exhibition itself, the launch evening promises to be a ‘Girl Power’ Spectacular. We have invited a raft of influential British females to attend the red carpet launch and will be creating a carnival theme for fans, with street performers, dance troops and of course the gorgeous Ashley James welcoming our guests and speaking to fans.”

Ashley says; “It’s such an honour to be hosting the red carpet launch evening of the #SpiceUpLondon Spice Girls Exhibition. Girl Power is so relevant in today’s society so I am excited to be the one that gets to welcome a host of female stars and VIP guests (as well as the odd Spice Boy) to the biggest music exhibition in London this year. I can’t wait to meet some of the fans and find out what they make of the launch evening and to have them involved in the excitement. It’s going to be an incredible evening – all the glitz and glamour of a Red Carpet launch with of course that all important Spice Sparkle. Let’s #SpiceUpLondon”.

In addition to the exhibition, which promises to be the biggest of its kind in history showcasing thousands of items of memorabilia alongside hundreds of the group’s iconic stage costumes, there will be a number of special events taking place around the city throughout the exhibition’s London residency.

#SpiceUpLondon have teamed up with the legendary Pineapple Dance Studios to offer exclusive and unique Spice Girls inspired dance classes where both adults and children can get involved and learn the dance routines from some of the most iconic Spice Girls performances. Priced at just £20 for adults and £15 for kids, they promise to be a lot of fun.

#SpiceUpLondon will also be taking over the O2 Academy Islington for a string of girl power nights during the four-week exhibition. The events will kick off on 28th July, with a #SpiceUpLondon launch party as they team up with Club De Fromage, London’s biggest pop and fancy-dress night for a special Spice Girls themed night of classic dancefloor anthems, mayhem and silliness.

The fun continues on Monday 30th July when Wannabe – The Spice Girls Show hits London for the first time. It’s the UK’s biggest touring theatre production inspired by the ultimate girl power group. The show is currently on its second UK tour and is now the nation’s fasting selling music theatre tour.

Wannabe follows the girls’ glittering careers from their first release to their 2012 Olympic Ceremony reunion. Featuring the Spice Girls’ biggest hits and songs from their solo careers the cast bring to the stage the infamous and unique charisma which the Spice Girls were so well known for. Representing the production, vocal coach Emily Clark said, “We’re all obsessed with 90’s music and we wanted to make a big splash with this huge concert tour. We’re creating the ultimate girls night out and who doesn’t know the words to ‘Spice Up Your Life’ or ‘Stop’?!”

#SpiceUpLondon have also teamed up with the Big Bus Company to offer a unique two-hour panoramic tour of London. Leaving and returning from the exhibition twice daily, fans will be whisked around the city on a special Union Jack-emblazoned open top bus bringing together the iconic landmarks of London, from Tower Bridge to Dover Street and highlighting particular areas of interest for Spice Girls enthusiasts. Featuring a tour guide clued up on all things Spice Girls, fans can enjoy one of the most fun sing-a-long sightseeing tours of London they can get!

Tickets for the #SpiceUpLondon Exhibition are on sale now through the exhibition’s website here and can be purchased for £10 per ticket with student/OAP concessions available. Add-ons, such as guided tours and exhibition programmes are also available to pre-order now.

Children under 12 are completely free, with the exhibition offering superb family value in the height of the 2018 school holidays.