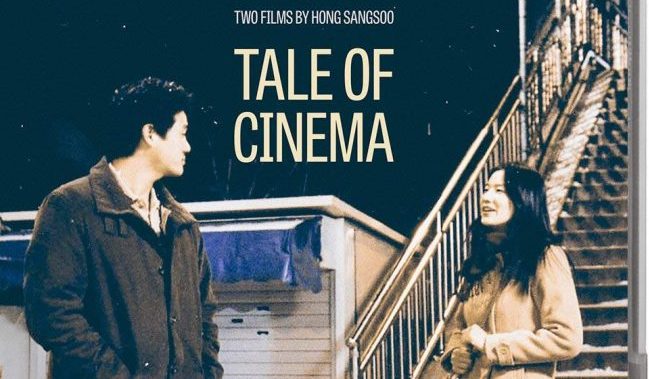 Tale of Cinema & Woman is the Future of Man: Two Films by Hong Sang-soo Blu-ray Review

Hong Sang-soo is a South Korean director not so well known in the UK. His films are highly praised by film critics but still rarely seen in this country. Good, therefore that Arrow Academy are releasing at least two of the director’s well received films, a pair of films that were made consecutively. There is an introduction to the set by Martin Scorsese none the less as well as two indepth talks by Tony Rayns on both films and the director’s life and career.

These were respectively the 5th and 6th films by Hong and in both films there are links between them in that they are about past events inform the present, themes that run strongly through both films. The first of the two films is Woman is the Future of Man (2004) which is about two old university friends who meet up after years apart. One, Lee Mun-ho (Yoo Ji-tae) is a university art teacher, the other, Kim Hyeon-gon (Kim Tae-woo), a filmmaking student who has recently arrived back in South Korea from being away studying in North America for several years. They go to a Chinese restaurant and both recall a girl whom Kim had dated when the relationship fizzled out after he relocated to America. Unbeknownst to him Lee had started a relationship with her after he left. They set out to find her again and try to relive their past.

The second film, made straight after Woman is the Future of Man, is Tale of Cinema (2005), a film that has many similar tropes. In this film there are several ambiguities that lead the viewer to being unsure whether we are watching a film being made or is the past or present. This appears to be deliberate on Hong’s part. In Tale of Cinema, it opens with two young people who find themselves, begin a relationship and conduct a suicide pact. They set the scene and take an overdose of pills together. She wakes up, throws them up and leaves. His father comes over and finds his son in a coma. He recovers and life goes on. Later in the film we learn that this is a film within a film and the story’s director recalling something that was relayed to him in the past until the past clashes with the present.

Unlike in Western films there is little to distinguish between past and present in order that the director can deliberately set out the ambiguities between the characters, the situations and past/present making the audience work a little harder to follow the plots. The first film was screened at the 2004 Cannes Film Festival (screened alongside a better known film from South Korea, Old Boy) and his films have had much critical praise if not much seen in the UK or USA. Both these films were French-South Korean productions and were therefore more widely seen in France. Hardly surprising, therefore, that many have compared Hong’s style to the great French realist, Eric Rohmer. There are several similarities to the pace and gentle drama present in both directors films. Again, like in Rohmer’s films, the male figures in both films appear selfish and self absorbed; it would be fair to say that the women are their victims perhaps inviting comments of misogyny towards Hong.

Both films are presented on the discs in High Definition with plenty in the way of a thorough introduction to the filmmaker’s work thanks to Tony Rayns excellent professional insight.