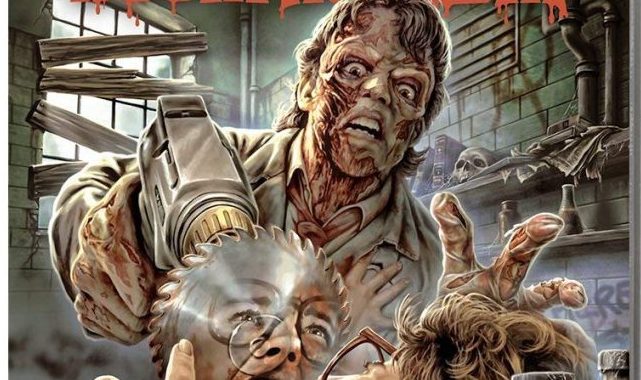 Doom Asylum (1987) is one of a myriad horror slashers and comedies that were released direct to video and made their ways to Blockbuster Video stores in the 1980s and early 90s. That is reflected by the presentation on the discs with the option to view either in the new 2K transfer shown on the 1.85:1 ratio or the option of the more squared version released on VHS in 1.33:1 for old style TVs. The former of course has additional information at the edges, whereas the latter cuts off the edges but has additional information top and bottom. Nevertheless this is a forgotten film given a re-evaluation by Arrow Video, something it has to be said they are quite good at.

The film opens with Mitch Hansen (Michael Rogen) and his lover, Judy (Patty Mullen) drinking in an open top car before they crash. Judy is killed and Mitch declared dead on the slab. All of a sudden his mutilated corpse gets up and is alive. 10 years later a group of friends take a picnic at an abandoned old asylum, near where the aforementioned accident took place. One of the friends is Judy’s daughter Kiki (also played by Mullen). There they find sassy punk band Tina’s Tots who try to shoo them off their trespassed site. It’s not long that both parties discover that their is someone else there – the crazed rotting corpse of Mitch who kills the kids off one by one using the number of autopsy tools at his disposal including a bone saw while continuing to mourn for his beloved Judy.

The first thing to say about Doom Asylum is that the acting is dreadful from Ruth Collins’ punk girl Tina who laughs her pointy bra off in a most irritating way to Rogen as the bogeyman killer with some dreadful rubberised make-up. The ‘comedy’ is mostly dreadful but it is hard to cut through the bad acting with the comedy and discern which is intentional and which is not. As a splatter movie it does in many feel like a child of Herschell Gordon-Lewis with its blood and guts, dreadful acting and comedy.

Of course one of the more interesting aspects of the film are the two leading ladies. The lead, played by Patty Mullen plays the dual role of Judy and her daughter Kiki, the surprise-surprise final girl. Mullen, the 1988 Playmate of the year only appeared in one other film as the hooker monster creation in Frank Hennenlotter’s mildly more superior horror comedy Frankenhooker (1990). The other lead is Kristin Davis, better known as the mousy Charlotte in the hugely popular TV series ‘Sex and the City’ made some 11 years after this film. Only 22-years-old when this film was made, Davis and Mullen both spend the entire film running around in bikinis (blue and red respectively) – and it has to be said Davis hides some curves not made that visible in the equally horrifying ‘Sex and the City’.

Filmed in a very tight 8 days, Doom Asylum was filmed entirely at a real abandoned asylum, Essex Mountain Sanatorium in Verona, New Jersey. Extras on the disc include interviews with Collins, director of photography Larry Revene and with the not so great make-up work of special make-up effects creator Vincent J. Guastini. There are also a couple of commentary tracks: one by screenwriter Rick Marx and another by The Hysteria Continues.