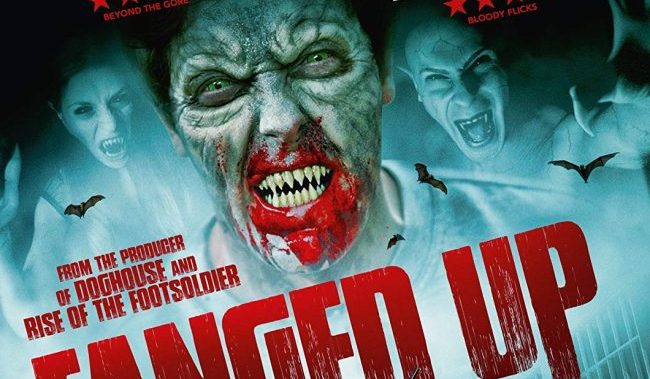 Blood cells, or should I say bloody cells are the order of the day in this prison based horror comedy. There have been a number of down and gory British horror comedies over the last few years, many of them drawing on traditional British humour with a silly idea for a horror film. The most famous and best of course is Shaun of the Dead (2004) in which a zombie outbreak spreads through North London with a stand-off in a pub. I Bought a Vampire Motorcycle (1990) was one of the silliest British horror comedies of the 1990s, that nevertheless has its fans and, if many choose to admit was good fun. One of the more recent such films is Fanged Up (2017), closer in comedy and style to Severance (2005) in which Danny Dyer and his work buddies are hunted down and beheaded one by one while on a team building trip (this was followed by the sillier Doghouse, 2009, also starring Dyer) and then there was James Corden who starred in the silly Lesbian Vampire Killers (2009).

In Fanged Up (geddit, the title being a play on ‘banged up’) Daniel O’Reilly, here in his feature debut, better known as a comedian who usually goes under the character name Dapper Laughs, plays a Danny Dyer type character, Jimmy Ragsdale, a loser cockney wide boy who works as a pot washer in a lap-dance club. He uses his position to chat girls up. Unsuccessfully it would seem. One night he picks on a married woman resulting in a fight, his sacking and arrest. Jimmy is found guilty of affray and sentenced for a weekend in prison. He is sent to an isolated prison and tries to laugh off his experience. He is thrown into a cell with a tough Russian Victor (Stu Bennett). Although wary of him Jimmy warms to Victor who calls Jimmy “spaghetti dick”. Also working at the prison is a new young female doctor, Katie Makepeace (Danielle Harold), who happens to be an ex-girlfriend of Jimmy’s. She soon discovers that the place is run by a vampiric governor (in an unusually understated performance from Steven Berkoff). She helps Jimmy and his pals escape and in doing so they must fight off the vampire guards and inmates. They all come to realise that this place is a larder, not a prison.

It would seem for the past more than 40 films vampire films are only worthy of being comedies in Britain. This film does make vague references to a tradition in horror. The prison head warder who looks more like the butch lesbian barmaid in the Shrek films is called Renfield, referencing Dracula’s assistant while Jimmy wrongly believes that he has just staked a zombie. “No Jimmy” Katie says. “A Frankenstein” he corrects himself. “No, a Dracula” – well, nearly. As is usual in many horror comedies, it overdoes the gore. In the HD it looks bright and red but exploding blood guts after the vampires have been staked is somewhat over the top.

Fanged Up premiered at last years Frightfest in London and clearly has had no big shakes since, only now being released on DVD. The humour is patchy, sometimes cliched but there is the occasional guffaw and chuckle in the film. O’Reilly, or Dapper Laughs, does allow his cheeky wide-boy charm to shine through and the film does follow through the recent tradition of British horror comedies and has all the usual support one would expect from the likes of Vas Blackwood and Terry Stone, who also co-wrote the script and is best known for his appearances in the Rise of the Footsoldier films. It would be nice to see a more traditional vampire movies emerging from the UK, but for now we will have to manage with lesbian vampires for laughs and wot not.