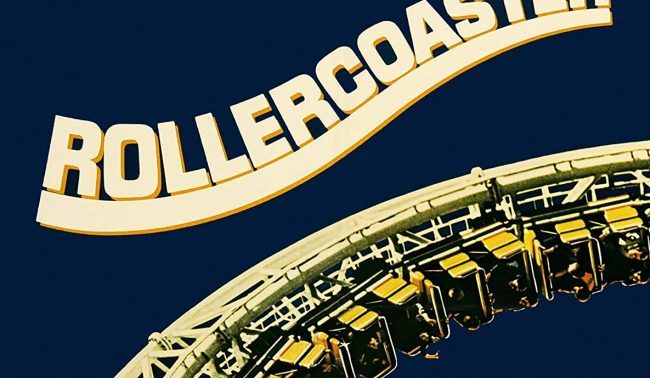 The 1970s was a decade of many-a blockbuster disaster movie. Rollercoaster (1977) was toward the end of a run that at least saw another couple of years of disaster films, at least until the end of the decade. Rollercoaster doesn’t entirely fulfill the tropes of a proper description of a disaster movie. This complete release by 101 Films is title number 003 in their new limited edition (to 3000 copies) Black Label range that includes a booklet and a slipcase, preceded by titles eXistenZ (1999) and The Grifters (1990) and will soon be followed by Black Book (2006).

I do recall this film being screened on ITV back in the early 1980s as a major prime time TV premier but has for many years fallen into relative obscurity. Great, therefore, that 101 Films have had the wisdom to make this a very handsome package. Despite its relatively strong cast which, in disaster movie tradition, adorned the poster, it nevertheless doesn’t have the big names of say the likes of The Poseidon Adventure (1972) and The Towering Inferno (1974) that led the genre, but had a strong cast none the less that included Henry Fonda in a relatively standard cameo part. Also, untypical of a disaster movie, the disaster happens at the beginning of the film rather than a group of people escaping a disaster. In addition it is a lone wolf terrorist rather than a natural disaster or a building or structure falling down with those representing society trying to prevent him killing innocent people, a premise idea that would run through all the Airport films, with the exception of Airport ’75 (1974).

We are introduced to the terrorist (the ever-youthful looking Timothy Bottoms) from the open. What we are not told is what his motivation is, making the acts he perpetrates even more evil given that there is no political motive or apparent personal vendetta. Early on he enters into the real Ocean View Amusement Park near Norfolk, Virginia having already pretended to be a mechanic and placed a plastic explosive device onto the tracks of the rollercoaster. He detonates the device causing the rollercoaster to crash, killing many of the passengers and crowd below. A short while later another incident occurs at an amusement park in Pittsburgh. Rides and safety expert Harry Calder (George Segal) realises there is a terrorist as does grizzled FBI agent Hoyt (Richard Widmark) who takes control of the investigation and is on a headlong conflict with Calder on the methods of stopping and catching the terrorist. After bugging a meeting, the terrorist realises that he can trust Calder and uses him to prove his point before threatening his next spectacular.

The film is presented in dual format on Blu-ray and DVD on High and Standard Definition discs, both on the American theatrical and the uncut German theatrical release (which is longer by seconds). The set is complete with documentaries and talks including ‘The 1970s: A Rollercoaster of Disasters’ by film historian, Simon Fitzjohn, an interesting piece looking at Rollercoaster in the context of the decade’s disaster films, as well as looking at the use Sensurround, a more booming and rumbling sound quality familiar to disaster movie fans and an interview with the film’s original story writer, Tommy Cook and how the idea came about and was translated to the screen. In addition there is a commentary track by the Dark Side Magazine editor and big film fan (especially horror and fantasy films) Allan Bryce along with David Flint.

Segal adds the drama and does battle with Widmark, while both Widmark and Fonda appear to sleep walk through their roles in a film that has more a Hitchcockian sense of suspense than many disaster movies. It is a film that has largely been forgotten over the years but thankfully 101 Films have revived it and while this may not be the greatest film ever made it is an enjoyable one that belies its 128 minutes.