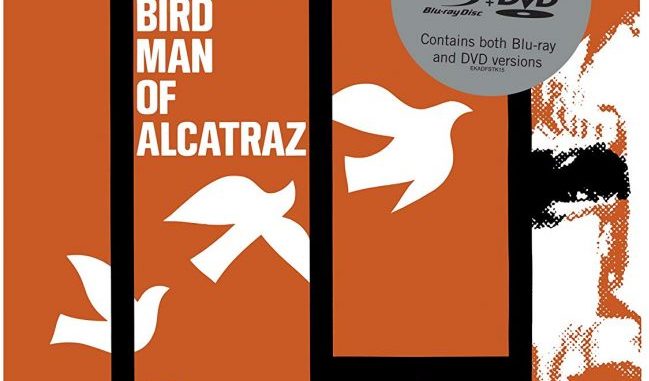 There have been very few actors who have demonstrated such humanity with a facial expression as Burt Lancaster. He proved this time and again throughout his career whether he played a gangster in his first feature film, The Killers (1946), as the preacher Elmer Gantry (1960), in the Italian films he made with Luchino Visconti or even as the complex convicted Nazi Dr. Ernst Janning in Judgement at Nuremberg (1961) and, in my personal favourite as The Swimmer (1968). Never was this more true than as the convicted murderer Robert Stroud in John Frankenheimer’s Birdman of Alcatraz from 1962.

Birdman of Alcatraz is loosely based on the life of Robert Stroud, a convicted killer who spent over 50 years in prison, much of it solitary confinement. Stroud was imprisoned in Leavenworth Prison in Kansas after initially being sentenced for 12 years for the murder of the client of a prostitute girlfriend in 1912. While in prison he murdered a guard and was sentenced to death before this was commuted to life. Frankenheimer’s film follows much of this accurately, exchanging the murder of a prostitute’s client for robbing a train and killing someone during the robbery. Following the murder and commuting of the death sentence Stroud is incarcerated in solitary where the prison warden, Harvey Shoemaker (Karl Malden) holds a lifetime of bitter resentment towards Stroud. Over the years Stroud becomes accepting of his fate becoming more human in the process. His only outside support is his devoted mother (Thelma Ritter) until one day alone in the exercise yard Stroud helps a stricken chick who’s fallen out of its nest. He nurtures the bird, in essence raises it and voraciously reads about birds and their health. Eventually he becomes an expert in birds, patiently making the bird cages from old boxes, becomes a famous writer in the field of ornithology with some acclaimed non-fiction books behind until the penal system closes in on him.

Interestingly Stroud only showed any interest becoming an expert and a ‘birdman’ while in Leavenworth. When he was transferred to Alcatraz in 1942 by a vindictive Federal Bureau of Prisons, his birds were confiscated off him into a much harsher environment. Much of the film largely sticks to the facts, although some of the characters are composites. Stroud’s story was related by Edmond O’Brien’s character of real life author Thomas E. Gaddis who was fascinated by Stroud’s story (arguably making the storytelling here one sided) and appears as Gaddis at the end of the film and narrates the story.

What is revealed is how a thoroughly unlikely, violent and unpleasant individual is humanised from the moment Stroud helps and begins to raise birds. Much of the film is shot in close-up, highlighting the sensitivity of these scenes. Shot in black and white by Burnett Guffey, the photography is beautifully brought to life in black and white with some often deep chiaroscuro shades and is presented in superb High Definition 1080p presentation by Eureka Entertainment in their Masters of Cinema series. It is shot almost entirely on a closed set, albeit imaginatively by the director, with the exception of the open and closing scenes of the film with the omnipresent Alcatraz in San Francisco Bay in the background. Everything is gelled and held together by Lancaster’s performance, whether it is relationship with Malden’s character (brilliantly acted by this superb method actor) and the antagonism between them, his relationship with his mother played by Ritter, as well as his wife-to-be (Betty Field) and even with fellow inmates he is isolated from (with tough guy Telly Savalas being one of them).

Birman of Alcatraz is a deserved classic. Frankenheimer only came to the film a few weeks into filming after Lancaster sacked the assigned director, British filmmaker Charles Crichton. He was an odd choice for Lancaster, but had previously directed him in the tough modern youth crime drama The Young Savages (1961). Prior to this Frankenheimer had worked exclusively in television having directed hundreds of armchair theatre productions and so in the end Lancaster was correct in his judgement. Through Frankenheimer’s subtlety as a filmmaker he has avoided too many cliches about birds being locked up and allows the film to speak for itself.

Handsomely packaged by Eureka, the release also includes an interview with Richard H. Kline, the camera operator for the film and an engaging talk on the film by film historian Sheldon Hall.