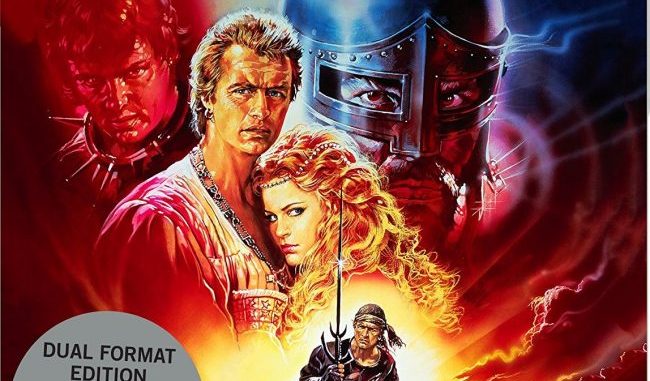 We’ve all heard of  von Sternberg and Dietrich, James Stewart and Hitchcock and Ingmar Bergman and Max von Sydow as movie actor/director collaborations. It is often forgotten what a strong collaboration there was between the Dutch pair, Paul Verhoeven and Rutger Hauer. This collaboration started with a Dutch TV series in the 1960s, ‘Floris’ that would continue with more Dutch films, the erotic Turkish Delight (1973), Katie Tippel (1975), Soldier of Orange (1977) and Spetters (1980). Their next, and last collaboration was the ambitious medieval epic, Flesh + Blood (1985). Although this film is a Dutch-Spanish-American co-production, it was not long after this that Verhoeven went over to Hollywood to make some of his best known films and the relationship between Verhoeven and Hauer was broken by this film with differences of opinion, but for Verhoeven this was his transition film to Hollywood.

Plot wise, the story and some of the style of Flesh + Blood is reminiscent of historical epics from a previous age: The Vikings (1958) and The War Lord (1965), both of which co-incidentally are released on Eureka Entertainment. The difference is that Verhoeven inserts his own visceral, realistic violence, earthy and erotic style onto the film. Despite the end result, on an extra interview on the disc Verhoeven discusses how the limited budget meant that the cast and crew did not have proper places to stay or comfort to the actors and made for, the different languages of the cast and crew and, in Verhoeven’s own words, a difficult shoot and “the worst experience of his career”. He also collaborated on this film with his long time cinematographer, Jan de Bont.

The story, written by another Verhoeven collaborator, Gerard Soeteman sets the tale in turn of the 16th century Italy, a time normally associated with the Renaissance, but here depicts a less enlightened age of war, mercenaries, rape and pillage. The film opens with the siege of a fortress with the support of mercenaries. The commander of the siege promises the mercenaries an allowance of 24 hours of looting if they take the city fort. Once the fort is taken the mercenaries are kicked out. The city rulers son, Steven (Tom Burlinson) is betrothed to Agnes (Jennifer Jason Leigh). The mercenaries take Agnes and gang rape her, but she ends up with Martin (Rutger Hauer), the leader of the mercenaries who had also raped her. The mercenaries camp in another castle they walk into where they find it riven with the plague. Steven plots his own siege of the castle to take Agnes.

Flesh + Blood is a very violent historical epic with much nudity and eroticism you’d expect from a Verhoeven film, although it falls between its Europeaness and American influences were to its detriment and as a result it bombed at the box-office and could have potentially damaged Verhoeven’s career and reputation, but he then went on to make Robocop (1986) for Orion. Looking at the film today, it is hard to see why it failed, despite being very un-Hollywood; the action has the look and production values of a Hollywood film, while the drama has more a Pasolini approach or sensibility. For writer Soeteman he used fascism as an allegorical starting point for the characters but based much of the ideas from written anecdotal evidence of the period. Some of the characters are sadists with no moral compass, including a Cardinal. The discovery of a statue of Saint Martin with a sword gives them something spiritual to rally around. The Cardinal is played by Ronald Lacey, an actor better known as the Gestapo officer in Raiders of the Lost Ark (1981) and in the TV Comedy series, ‘Porridge’ as Harris.

It is interesting that Flesh + Blood gets a release by Eureka! in their Classics Collection as it most certainly a film where its lack of box-office success should not overshadow a very interesting and violent film showing the horrors of the Medieval period in such a way with superstition, a lack of humanity and the plague at the core of the film.

The film is laced with some great extras: an interview with Verhoeven on the film, an audio only interview with Hauer as well as other interviews with Soeteman and the films composer, Basil Poledouris who wrote a score for the film that has all the sweep of any quality Medieval epic, Verhoeven having liked Poledouris’ work on Conan the Barbarian (1982). Another extra is the French documentary on Verhoeven that follows his life and career, on which Flesh + Blood is described as Verhoeven’s Apocalypse Now.