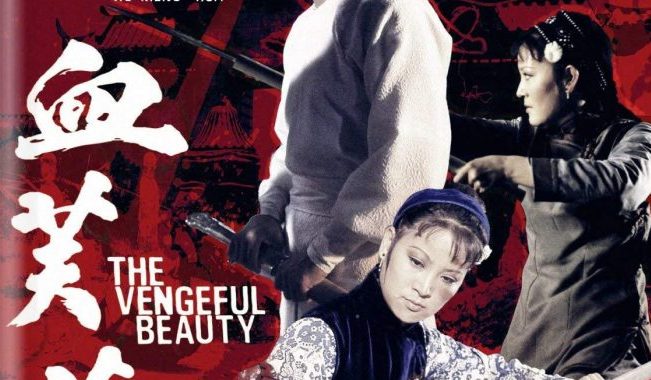 More exciting chopsocky action from 1970s Hong Kong available for you to get your teeth in to. Once again directed by Meng Hua Ho, the man who brought you many a classic from Hong Kong popular cinema, including The Mighty Peking Man (1977), the odd horror, The Oily Maniac (1976), The Human Goddess (1972), the Black Magic films, the extremely entertaining The Dragon Missile (1976) and the one most related to this latest release, The Flying Guillotine (1975). All of these are in the 88 Films Asia Collection, including this film, The Vengeful Beauty (1978).

Many of Meng Hua Ho’s films are costume drama martial arts action films and The Vengeful Beauty is no exception. Set at the time of the Qing Dynasty under the rule of Emperor Yongzheng (contrary to the film, this was a relatively peaceful period but he ruled efficiently and despotically) the film quickly gives us a flavour of the period. In the opening scene we see the Emperor’s men burning books, possibly a political comment on the destruction of culture, literature and free thinking coming from Hong Kong’s giant neighbour, China. The Emperor also has assassins who use the flying guillotines to cut off the heads off their targets and victims. The Emperor wants to keep this gang of assassins a secret. He tasks the leader of the flying guillotines, Jin Gangfeng (regular Shaw Brothers bad boy Lo Lieh) to kill off by the man in the security services who has learnt that the assassins are acting at the behest of the Emperor. The Emperor orders the death of the man and his whole family.

When Rong Qiu-yan (Chen Ping) returns home she finds that her husband and the rest of the family indeed have been murdered, but not before he can write in blood who the killers are and the name of their master. Qui-yan is 2 months pregnant with her dead husband’s child and vows revenge. She teams up with a former Flying Guillotine member named Ma Seng (Norman Chu) and her old martial brother Wang-jun. They set out on a journey to her uncle’s and seeks her vengeance. Meanwhile, Gangfeng individually sends his two sons and daughter to kill the trio.

Meng Hua Ho’s films are inventive, stylish and highly entertaining, even if some of the fight sequences are clearly choreographed and the sets obvious, although it also uses its locations well. As well as a sort of follow-up to The Flying Guillotine, it also has some of the poetic action and leaps that make it a clear forerunner of Crouching Tiger, Hidden Dragon (2000). In one scene there is also a fight among bamboos including some flying in the air sequences (and some hilariously bad sound effects) reminiscent of the more recent House of the Flying Daggers (2004). Extras on the disc are very insightful and also act as a good inroad to the wonder of Hong Kong cinema, including an interview (in English) with Hong Kong star, Yueh Ha, an actor who not only appears in The Vengeful Beauty, but also had starred as the Monkey King in two Monkey films starting with The Monkey Goes West (1966) as  (who of a certain age doesn’t remember the ‘Monkey’ TV series) and starred in a film by the master of wuxia, King Hu’s Come Drink With Me (1966). The other extra is an interview with Susan Shaw (no relation to Sir Run Run Shaw, owner of Shaw Brothers Studio) who stars as Chin Hsiao-Chi, the daughter of Gangfeng. It has to be said in this short interview she comes across as a tragic character and explains how her role in this film was such a miserable experience. Of course, as with most of these classic Shaw Brothers releases on 88 Films there are sleeve notes written by Calum Waddell that goes into fascinating detail about The Vengeful Beauty and places the film well into context of when it was made in the 1970s, placing it in the decade’s numerous women avengers in a changing society.