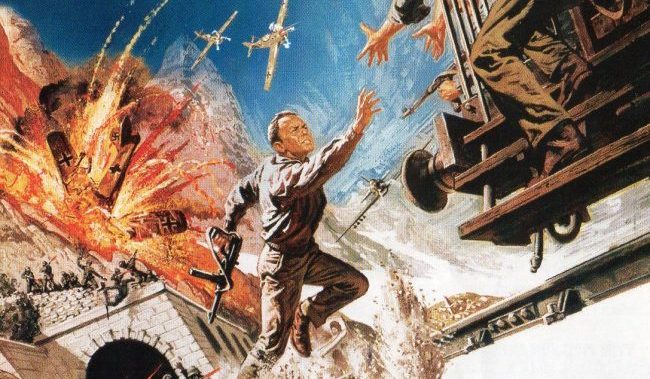 After World War II there were many prison of war films coming out of Great Britain that showed how the plucky Brit survived in PoW camps, attempted to escape and keep the stiff upper lip firmly in place. Of course these films were demonstrating how the national spirit survived in captivity in post war Britain. From Hollywood there was Stalag 17 (1953) and of course David Lean’s The Bridge on the River Kwai (1957) showed the hardships of British PoWs (and one American) under the extremely harsh conditions of Japanese captivity. In the 1960s, the one film that came to represent the war film of the decade was the still very popular The Great Escape (1963). A big budget movie shot on location in Germany with a big cast of stars it was a blockbuster. Von Ryan’s Express (1965) wanted to go a step further. Early on in the film after American air pilot Colonel Von Ryan is captured, he mocks his fellow British captors for digging a tunnel to escape while his men starved and lived in terrible conditions, clearly a dig at The Great Escape. He controversially grasses them up to camp commandant, Battaglia (Adolfo Celi, better known as James Bond foe, Thunderball, also 1965).

So sets the tone of Von Ryan’s Express. Von Ryan is shot down near Anzio in 1943, just after the Allies have taken Messina, Sicily and before the beach landing there. He is captured by the Italians (who take him before the Germans get to him) and put him into the PoW camp where he immediately runs into conflict with the highest commanding officer, the British Major Finchman (Trevor Howard) (most of the PoWs are British). Von Ryan is against risking lives to escape as the Allies will liberate in weeks. Von Ryan is still able to get the better of Commandant Battaglia but ends up in the hot box for his efforts. He wakes to find the guards have left the camp as the Allies approach. Von Ryan releases Battaglia against Finchman’s will as he wants him court-martialled in a kangaroo court carried out by the former prisoners. Battaglia later betrays them to the Germans leading to their capture and some men being shot. One of the more decent Italian officer’s, Captain Oriani (Sergio Fantoni) is also held with the men. They are transported on a train to a PoW camp up north. On the way Von Ryan hatches a plan to take over the train and take it to Switzerland.

Made in a decade of many action packed big budget war movies, this one is up there with some of the best of them. It is mostly fiction (unlike The Great Escape that was an exaggerated version of a true story), although there is a kernel of truth to the story. It is based off a book by David Westheimer who had been held captive in Italy and transported north to Bologna by train. Although he and his captives tried to make an escape attempt nothing came of it. In the hands of Hollywood scriptwriters, however, it was made into an exciting war adventure and Westheimer left after delivering the first treatment.

The action is relentless in the film that moves at a cracking pace throughout its almost 2 hours in length, while the eye is constantly being pleasantly diverted by its beautiful locations, being shot in Anzio, Lazio and Spain (the train tunnel finale) with only the prison camp being shot on a Hollywood lot – and the odd vintage train or two moving with the crew.

Frank Sinatra, an actor who always played, erm, Frank Sinatra is no different here and was known to want to walk on the set, do his lines and leave, taking less of a professional approach to his films than he did his main job as a singer. For Von Ryan’s Express his behaviour was the same, but had asked for the role, clashed with director Robson on the set, as he did with all his directors but had a good deal of creative input into the story and look of the film, including the ending going against the wishes of Hollywood producers. His co-star, Trevor Howard has often said that he was a second fiddle to the main star, but here acts as a great counter-foil to Sinatra’s Von Ryan and has a pretty strong part, not allowing the main star to totally dominate.

As with many of the Premium Collection releases exclusive to HMV (including Fopp), the dual format release comes complete with many extras including short previous released featurettes on the Making Of and a Hollywood history of war films, as well as a short featurette on the career of the films composer, the prolific Jerry Goldsmith who in this film wrote a mostly standard war movie soundtrack, albeit a fairly sparse one, compared to some of his better know scores.