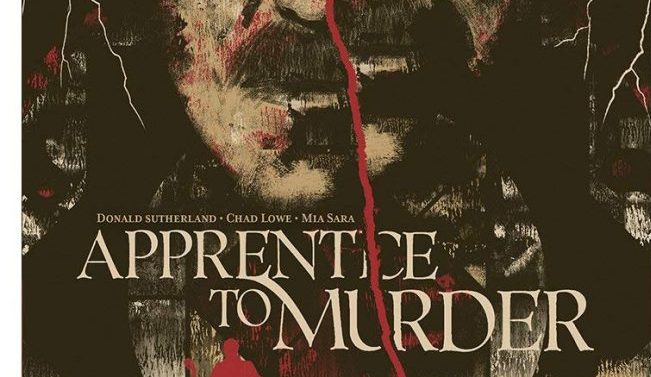 Apprentice to Murder (1988) is a horror film… of sorts. It certainly has many of the tropes of a horror film, one of a theological bent common among possession horror movies, but remains ambiguous throughout as to whether it is the two protagonists imaginations or whether we are witnessing the fantastical of traditional horror. It at least is peppered with all the tropes of the horror movies and draws on many different horror film sources, not least of all American gothic.

Although filmed near Bergen in Norway, Apprentice to Murder is set in rural Pennsylvania in 1927; the manner in which the characters live and work feels more like a Norwegian community than an American one. It is based off a real story that occurred in 1927 and although the names have mostly been changed, it does follow the quirky so-called Pow-wow religious fervour mildly popular in the 20th century, in which Christian fundamentalism and voodoo would co-exist. American Gothic in style and look, the film focuses on young and innocent 18-year-old Billy Kelly (Chad Lowe, younger brother of Rob Lowe) who lives with his parents, his meek mother (Rutanya Alda) and drunk and gruff father (Eddie Jones), who often beats the boy. At the local mill where he works he meets and falls for Alice (Mia Sara), a young co-worker. However, their relationship is threatened when Billy meets the enigmatic religious man, John Reese, a renowned charlatan Pow-wow religious nut. Reese sees the Devil everywhere and tries to drive it out. This is where the film puts its horror to the fore with the pair imagining possessions, fire and brimstone where Billy comes under the spell of Reese and sees him being able to help against his fear of a local bearded hermit.

A Canadian/Norwegian/American co-production the film stars the indefectible Donald Sutherland who as with the likes of Peter Cushing and Christopher Lee would bring a degree of class and decorum to the lowest budget films (not suggesting that the prolific Sutherland is particularly identified as a horror star that is). That it was filmed in Norway adds a sense of isolation and there is a smart eeriness to the film that does not rely at all on violence or gore to make it work but instead on atmosphere. An aspect that is not given much focus on the disc’s extras is the music. It is haunting and very Gothic in tone with some interesting wailing violin scores, giving it an added moody atmosphere of time and place.

The extras give some great context to this otherwise small film with some decent performances, aided by an interview with cinematographer Kelvin Pike and another new video interview with makeup supervisor Robin Grantham who talks affectionately about the making of the film and the filming of it in Norway. There is also an engaging featurette journeying through the history of possession movies by horror film historian and critic Kat Ellinger with lots of clips and posters from classic possession horror films. Released on Arrow Video this is an interesting and worthy re-evaluation of an old film often dismissed.