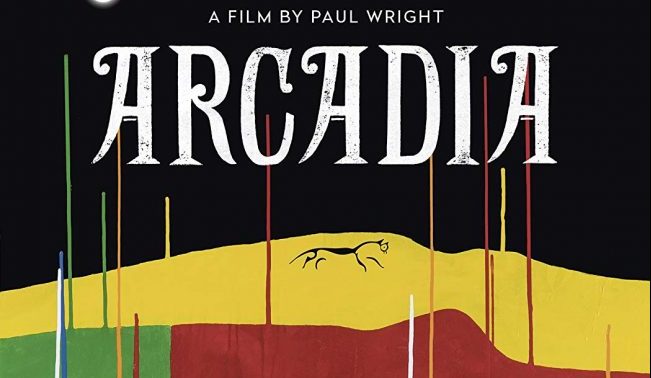 Released theatrically in June, Arcadia (2017) is Paul Wright’s arthouse documentary journey through the strange relationship between the British people (mostly the English here it would seem) and their communion with nature over the past over 100 years told through its customs, traditions and local ritual. The second feature length film by Wright, following his For Those in Peril (2013), this film has no real narrative other than almost 80 minutes of clips from over the years split and shown in themes to an amazing pulsating soundtrack from ambient to rock to folk music.

The film shows rather than tells the story of the manner in which Britons have communed with nature without any sense of Nationalism or being informed by, or informing of Brexit, steering clear of politicising the images. Instead, it unearths the strange image of Britain so familiar to anyone growing up in this country. For example Gloucester cheese rolling or a Morris dance takes on another form in the film, something almost bizarre and, day I say it uncanny, rather than the normal image of these local annual customs presented as the norm in a soft news story.

If you thought a work of fiction such as The Wicker Man (1973) portrayed the strange pagan harvest festival rituals and sacrifices as strange, think again at the real portrayal of this land beyond the narrative of the fictitious Summerisle. There is a strong sense of folk horror threading through some of the imagery of the film, highlighted not least of all through some of the clips from narrative cinema including David Gladwell’s Requiem for a Village (1976) in which we see the dead rise from a Sussex English churchyard in a long forgotten film until recently, uh-hum, unearthed by the by the BFI. Indeed this is not the only shots from narrative cinema, but Wright has avoided any obvious footage from such films as The Wicker Man and kept it to the less well known such as moments from Bill Douglas’s Scottish films, The Orchard End Murder (1980) and Kevin Brownlow’s Winstanley (1975), yet still kept these moments to the minimal.

The connection between clips of Victorian threshing of the fields, Morris dancing and 1990s raves in a field is seamless. Wright’s editing is first rate, an extraordinary editing together of music and imagery that runs for the entire 78 minutes. It avoids cliche with the original music provided by Adrian Utley, formerly of the group Portishead and Goldfrapp’s Will Gregory with an unearthing of 1960s folk singer Anne Briggs’ music. This is perfect BFI material with the filmmakers having scoured the BFI archive and extrapolated footage from the Edwardian period such as the bucolic images of workers and children in hayfields filmed by Cecil Kellaway up through the ages, naturism, hippy festivals, TV news reportage and raves.

At times it did feel like this was the first time I have seen this sceptered isle, at least through fresh, self aware eyes. The title is oddly apt as it portrays a bucolic Arcadia that seems to have at times a dark, almost Tarkovsky-like undertone; an almost romantic lightness and darkness that the film manages to portray, a folksy and almost sinister ritualistic look to it.

There are a host of added extras on the disc including a Q&A with Wright, Utley and Gregory, their own interpretation of the film and their own impressions of what they unearthed, as well as several added short films that add as nice companion pieces.