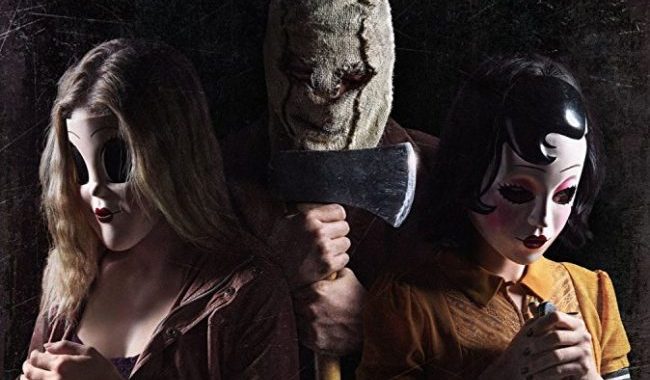 It’s now 10 years since the original The Strangers was released. It was a slasher film coming in the wake of all the torture porn horror that prededed it that had franchise written all over it. Released theatrically a few months ago, this sequel, The Strangers: Prey at Night from the original film by Bryan Bertino had been in the planning stage ever since and for whatever reason was never made. As a kind of even more nightmarish version than the Manson Family murders it expands even further than the original. That film has Liv Tyler and Scott Speedman as a 30 something couple who are terrorised in their home by 3 masked assailants. This one expands from the home to an empty trailer park. The couple too is replaced by a family of 4.

It opens, like the poster by telling us that the film is ‘based on true events’. Can these ever be believed and is telling us this not now a cliche? The opening soundtrack is Kim Wilde’s ‘Kids in America’. We first see a trailer park and for those familiar with the original film, a knock at the door and the appearance of a girl who turns out to be viscious killer, murders the woman and slips into the bed next to the sleeping elderly man. It takes a while before we move further into the main body of the story with the rest of the film being taken up with a more traditional serious of slasher chase scenes. We are then introduced to the family consisting of Mum and Dad and their two bickering kids, baseball kid Luke (Lewis Pullman) and their angry young teen daughter, Kinsey (Bailee Madison) who sulks for the entire journey to the trailer home to see their Aunt and Uncle (from the beginning of the film). The Mom (Christina Hendricks) leaves a message to say they will be arriving late.

When they arrive, the park appears empty and it would appear that not only can they not find aunt and uncle, but the place is deserted. It’s a slow burning start, but before long the audience is given one chase and slash and hack after another by the 3 assailants: the axe wielding cloth head, ‘Pin-up’ and ‘Dollface’. Without giving too much away it is not long before the sociopathic killers start to dispatch the family beginning with the Mom (Christina Hendricks, the best known actor in the cast).

In many ways this is more a retro horror film than its 2008 predecessor. Although this time not directed by Bertino (who did co-write and produce the film), it is made by Johannes Roberts, a British director who made the UK slasher F (2010) in which a serial killer stalks a school, allowing the protagonists to run around and attempt to escape in a fenced off environment as in this film. Elsewhere there are homages to Tobe Hooper (the ending is directly lifted from the final shots Texas Chainsaw Massacre), Wes Craven and John Carpenter (Christine, 1983) as well as the Friday the Thirteenth films. In addition there is a nice use of mist and its lighting, again reminiscent of a Carpenter film or two. The 1980s theme is pushed further with the 80s soundtrack, starting with Kim Wilde and also including Air Supply, Marilyn Martin and Bonnie Tyler’s ‘Total Eclipse of the Heart’ with each of these songs taking on a chilling persona with what is happening on the screen.

The Strangers: Prey at Night is a better sequal than expected, especially given the 10 year gap between the two films, even if at times it is a little derivative of other slashers, but rightly seems to wear this with pride without being too obvious. Much of this is thanks to Roberts handling and clear love of the genre. The long sequence of introductions to the family gives us an idea of who they are, but does not elicit much in the way of particularly liking what is otherwise fairly generic characters. In the previous film the characters were more likeable, but ineffectual in defending themselves; Madison’s Kinsey is at least a feisty teenager and at don’t think it would come too much as a surprise to reveal that she is the ‘final girl’.