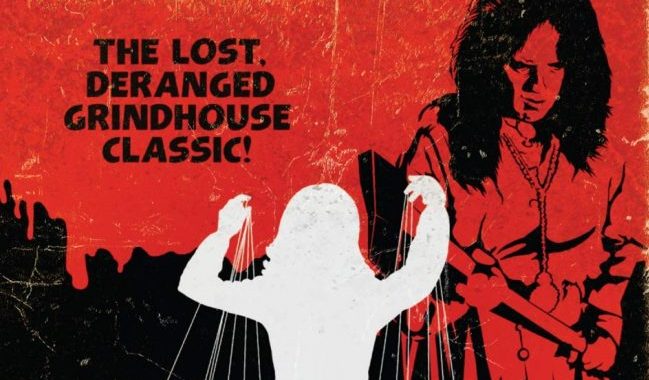 Two years after Miss Leslie’s Dolls (1973) was made, a similar plot device was used in a little grindhouse film called The Rocky Horror Picture Show in which a married couple, Brad and Janet are caught in the rain when they turn up at the transvestite Dr. Frank-N-Furter’s castle. They are greeted by Riff-Raff who exclaims they are “all wet”. Inside the innocent Brad and Janet’s lives will never be the same again after their experience. Of course, the stage show ‘The Rocky Horror Show’ references and camps up horror and fantasy films by song and action and first appeared at the Royal Court Theatre in Sloane Square in 1973, the same year this film was made. I have never read anywhere that there were any influences either way, with the first auditions for ‘The Rocky Horror Show’ taking place the month that Miss Leslie’s Dolls was released. Maybe its just one of those zeitgeist thingys.

Miss Leslie’s Dolls opens with Miss Leslie (Salvador Ugarte) unearthing the naked corpse of a young woman in a graveyard and dragging her off to her big house. A little while later a group of 3 students and their young teacher are lost in the rain (this also has its origins in The Old Dark House, 1932 as well as The Rocky Horror Picture Show) and call on the house of a Miss Leslie. This odd occulty transvestite person (with a dubbed woman’s voice) invites them to stay. Later things start to get weird and they begin to understand that Miss Leslie has a bizarre mother fixation and controls her from her grave (Psycho?). One of the group finds herself in the cellar and pulls back a curtain to reveal a group of harem women that she thinks are very life-like waxworks (reference to House of Wax, 1953). They are in fact Miss Leslie’s ‘dolls’ – real life dolls that she has ‘made’ since her doll factory burnt down years ago. Miss Leslie realises that one of the girl’s is a spitting image of her lost love who died 20 years ago in the doll factory fire. Miss Leslie is trying to use the supernatural to reincarnate her, hence the bodies in the cellar. During the night (after some saucy intermissions of lesbian lust) Miss Leslie axes most of the curious young people to death, hoping to gain a resurrection from one of the bodies. Watch for the confusing climax, it gets very silly.

Being this is a grindhouse film, the acting is pretty dreadful and the film cheap looking and a bit messy not to say seedy. Surprisingly the film was actually shot in the relatively cheap Philippines Released by Network Distributing the film has been nicely restored and makes several references to other horror films and horror film tropes, but is an unusual release for Network to say the least. Sure, its high camp and needs to be taken for that, but will not appeal to all, in fact it will only appeal to the few. No extras.