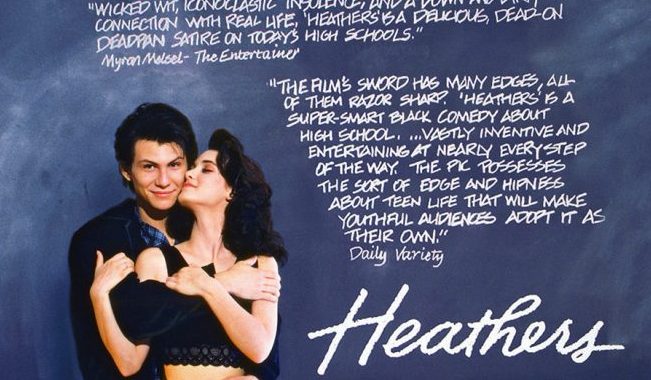 “Whether to kill yourself or not is one of the most important decisions a teenager can make”. So says a college councillor to Veronica (Winona Ryder), one of her students. Indeed. Long before there was Mean Girls (2004) and Easy A (2010), Heathers (1988) tapped into the psyche of being a teenager at high school. A black comedy, it was way darker than say that being offered by the likes of John Hughes with such films as Sixteen Candles (1984), The Breakfast Club (1985) or Ferris Bueller’s Day Off (1986). The dark comedy, in contrast to John Hughes’ films and starring upcoming star Winona Ryder gave the film all the elements to make it, if not a commercial success, certainly a critical and cult one.

The film opens and introduces us to the three ‘mean girls’, all called Heather while a dreamy version of ‘Que sera sera’ is played over the credits. They are dressed as preppies, made up with expensive clothes and are playing croquet. After a few minutes the camera pans back to see Winona is buried up to her neck while the Heathers are playing croquet around her. 17-year-old fellow class-mate Veronica (Ryder) has been accepted by the ‘popular girls’ at Westerburg High School in Sherwood, Ohio. The Heathers are mostly feared at the high school because of their status and bully the fat girls and the geeks. In the school canteen Veronica’s eyes are drawn to a new boy in the corner.

When a group of sporty prep boys try to mock him, the boy, JD (Christian Slater) pulls a gun and fires it. We next hear that JD could be suspended for this action. Nevertheless, Veronica is drawn to JD and Veronica falls under his influence. The pair break into one of the Heather’s home after Heather humiliated her at a party. JD puts drain cleaner into a drink. When Heather comes home, she drinks and is poisoned dead. They frame the death as a suicide. They decide to take their killing further by killing the sport jocks who they frame as a gay suicide pact. The school council start believing that there is a fad for suicide running through the school.

This was the first film for Michael Lehmann, who, although he made several films, some of which were huge budget successes, he never lived up to the career high or critical success of Heathers and often worked on TV. Lehmann began his film career working for Francis Ford Coppola, but earned his first film by making the cheap John Waters style high school trash short comedy, ‘The Beaver Gets a Boner’, a cheeky and dark comedy that is interestingly included on this Arrow Video release. Sadly Lehmann’s career never lived up to Heathers and went on to make the turkey, Hudson Hawk (1991) starring Bruce Willis a couple of years after Heathers.

Heathers does demonstrate the audaciousness of a young fearless filmmaker. It is a heavily stylised film with a strong use of colour, not least of all the strong us of colour on the clothes of the Heathers. The scene in which Veronica lures two jocks into the wood with the promise of a threesome when she and JD laugh while shooting them and then frame them as a gay suicide pact (even the funeral keep the jokes coming) make for some of the darkest laughs. Meanwhile, JD’s character goes from an edgy character and at times normal teenager to psycho; listen carefully and Slater sounds like a young Jack Nicholson in The Shining (1980). The number of murders in the film is deliberately kept to a minimum to keep Veronica’s character sympathetic. For the first murder committed against Heather Chandler (played by the late Kim Walker), Veronica is merely an accessory but willingly murders the jocks. After that she begins to have doubts. Of course the film does have precedents with the likes of Pretty Poison (1968), but for the most part shows a good deal of originality. Yet in post Columbine America it is unlikely Heathers could be made as a black comedy at all these days and with the continual atrocities that occur in the United States it looks unlikely that this would change any time soon.

Heathers has grown in cult status and remains popular for those who have seen it or remember it. That is reflected in the jam-packed extras on the disc on this very attractive looking new 4K scan. Best of all is the 30+ minute appreciation of the film by fan John Ross Bowie, best known as Kripke in the wonderful ‘The Big Bang Theory’. There are also tons of interviews with cast and crew including Lehmann himself (on many of the featurettes), the casting, the production design team, the writers, the use of the music by David Newman and a further featurette on the production. This, with the audio commentary by Lehmann, it is clear that there is unlikely to ever be a better release than this. It’s worth re-visiting time and again for the wonderful dialogue alone. With teenage lines such as “Dear Diary, my teen-angst bullshit now has a body count” who can’t resist this film.