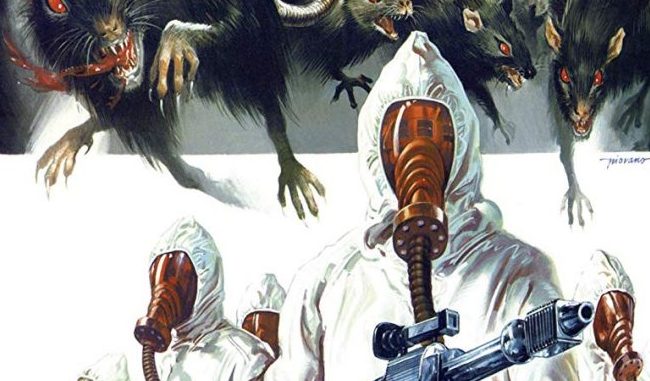 Released on 88 Films, there latest release in the Italian Collection is Rats: Night of Terror (1984), one among a whole bunch of post apocalypse action science-fiction genre pictures that came out of Italy through the 1980s. Others included 1990: Bronx Warriors (1982), Escape From the Bronx, 2019: After the Fall of New York (both 1983) (available on 88 Films), Hands of Steel (1986) (the latter available on 88 Films) and Urban Warriors (1987). John Carpenter’s Escape From New York (1981) (and prior to this, Mad Max, 1979) was, as far as popular Italian cinema was concerned at any rate, a game changer. One of the key differences between these films and the American contemporaries is the body horror and gore adopted. Rats is a prime example of this.

The narrated prologue to the film tells us the year is 225 AB (After the Bomb) and the troglodyte humans are starting to venture out onto the surface of the world for the first time. A group of armed survivor bikers are among those who stick their heads over the parapet. What they find at a deserted town they arrive at is one occupied and dominated by greasy red eyed black rats who are out for eating flesh. A rivalry emerges between two in the gang – Kurt (Ottaviano Dell’Acqua, credited as Richard Raymond) and Duke (Henry Luciani) as the gang try to escape from an abandoned house they’re in is quickly filling up with rats.

This motley crew travel as though they were a group of Mad Max Road Warriors who step into the world of Ben and Willard, let alone a world inhabited by James Herbert creations (Herbert’s debut novel, ‘The Rats’ had been adapted as a dreadful B movie, Deadly Eyes, 2 years before Rats). They are in search of food and we are told that they are starving, although this long haired handsome, buff bunch of individuals look more like they are off to an alternative 1980s disco. They do find sugar, grown vegetables and vats of water, that soon becomes infected with swimming rats. It’s not long before one of the band sees her sleeping bag move. Before long, in one of the more effective, if simply done set pieces in the film we see a rat crawling out of her mouth. Rats: Night of Terror is a very cheaply made post apocalypse B movie horror. The film is directed by Bruno Mattei (credited here as Vincent Dawn), a patchy exploitation director who had made Zombie – Creeping Flesh (1980) and a bunch of soft porn features along with an uncredited directorial collaboration with Claudio Fragasso, who also co-wrote the script. Fragasso would go on to direct Zombie – Flesh Eaters 3 (1989), also known as After Death, a recent release on Blu-ray by 88 Films. The film is darkly shot with lots of shadows. Co-shot by Franco Delli Colli, a director with a good deal of experience, even in A features, it never the less feels that it is shot this way as much as to hide the cheap production, as well as to create atmosphere. On the accompanying booklet, actress Geretta Geretta states that it was shot on the sets of Sergio Leone’s Once Upon a Time in America (also made in 1984).

What does effectively build the atmosphere in the film is Luigi Ceccarelli’s soundtrack, giving an eerie undertone the film so needs. On an extra featurette interview with Ceccarelli, he says that he started in cinema through Fragasso and went on to make almost 50 soundtracks to Italian exploitation films. He also talks about how working on this film there was an unusual working dynamic between Fragasso and Mattei. An amusing extra included is an interview with the leads and stuntmen Massimo Vanni and Dell’Acqua who talk about their work on this film and on other Italian exploitation films, including those with Lucio Fulci.

In addition to these two extra featurettes, we have come to expect nicely packaged content to 88 Films releases, especially given that these are exploitation B movies. Released in a limited edition slipcase and  poster artwork on the cover, there is also a glossy A3 sized foldout poster and in the accompanying booklet, an interview with the film’s co-star, actress Gerettta Geretta. Geretta is best known for her role in Lamberto Bava’s Demons (1985). This feisty Afro-Italian actress who graced other exploitation films back in the day is interviewed in the booklet by Calum Waddell. Playing the tough woman in Rats, Geretta also discusses the film convention circuit, of which she is a regular guest and the latest project she is helping get off the ground, namely Demons 3. Watch this space…