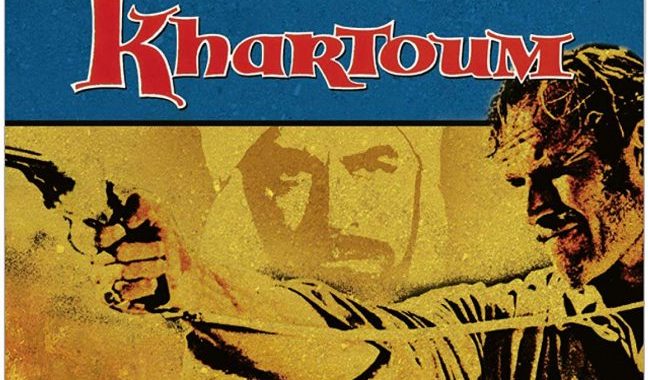 Khartoum (1966) was an epic about the British Empire’s foreign ventures made 4 years after David Lean’s massive success of an epic, Lawrence of Arabia. The spectre of that film hangs heavy over Khartoum. Like the earlier film, Khartoum depicts the career, or a certain moment at the end of the career of an unconventional British Empire figure, namely Major-General Charles Gordon. It stars Charlton Heston who, ever since he had starred in Ben Hur (1959) was the leading actor of widescreen epics.

Released by Eureka Entertainment on Blu-ray, the film looks impressive on this High Definition transfer. There are several key large battle scenes in the film, including one at the opening in which some 10,000 British led Egyptians are depicted as being slaughtered by Sudanese Muslim zealots led by Muhammad Ahmad (Laurence Olivier) who believes that he is the Mahdi leading his Mahdi army. The year is 1883 and this event leads to a crisis back home in the British government with Prime Minister Gladstone (Ralph Richardson) under pressure to do something. His instinct is to do nothing, but is put under pressure to send in Major General Gordon to save the situation who it was said entered into battle with nothing but a cane. He is at that moment in the Congo.

While hunkering down in Khartoum, Gordon soon finds himself surrounded by the Mahdi army. The city is on the confluence between the White and Blue Nile and begins barricading himself in. Gladstone’s reluctance to do anything starts to make Gordon something of a maverick with the British government who eventually sell him out and abandon him. On a very informative extra on the disc, film historian Sheldon Hall explains how Heston claimed that this was one of his favourite films, who also said that this was one of his worst directed ones. Hall breaks down what Heston meant by this in that anyone could have directed this movie, all they had to do was deliver the ambitious set pieces while the actors delivered their lines. In other words he probably felt the film was under directed. Perhaps a little unfair. It is true that for many critics, once you overcame the film’s spectacle, it was perceived by many to be dull.

I think this is something of a disservice both to the film and the director, Basil Dearden. Dearden was no journeyman. He had made many films for Ealing Studios including in his early years for George Formby and Will Hay and made such intelligent films tackling homosexuality including the superb Victim (1961). But he had never tackled an epic and the largest budget was for his previous film, the widescreen spy farce Masquerade (1965). Nevertheless, despite its shortcomings, it is one of the last great films of its type.

Heston is convincing as Gordon, looks like him and plays the part with an arrogant bravado without any overacting. Laurence Olivier’s performance as the Mahdi is more controversial. Essentially in black face replete with accent, he does play the part better than he did his lovey black face turn as Othello the previous year. It would be fair to say that were the film made today it would unlikely boot polish would be used to make him appear more Sudanese and instead a black actor would play the part or at least a Caucasian actor not reducing to such heavy make-up. Richardson of course is standard casting as Gladstone while Richard Johnson, Michael Hordern and Nigel Green provide decent support. Thankfully there is no love interest.

Shot and originally screened in the wide Cinerama format, Khartoum also has the distinction as being the last film shot in Ultra Panavision 70 (until Quentin Tarantino’s The Hateful Eight, 2015) which for the more discerning  cinemagoer meant that the film was not only shot in 70mm but also meant it could accommodate six track stereo sound while an anamorphic picture compressed the image to create a wide angle lens aspect ratio of 2.76:1. The Eureka release letterboxes the same aspect ratio so nothing is lost on thus HD transfer. To give the film greater credence there is an interesting commentary track by film historians Lem Dobbs, Julie Kirgo, and Nick Redman.