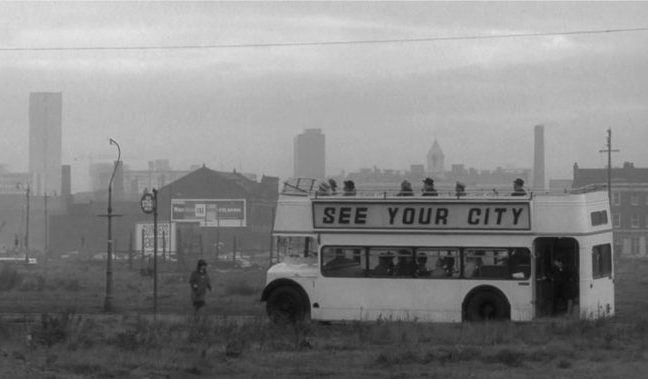 In June this year BFI released the box set, ‘Woodfall: A Revolution in British Cinema’, containing 8 of the best and most challenging films of 1960s Britain, from Look Back in Anger (1958) to The Knack (1965) with tons of extras. Woodfall was co-founded by Tony Richardson, former husband of actress Vanessa Redgrave who also directed many films for Woodfall, including one of the short films included here. This set, Red, White and Zero follows on and accompanies that box-set with three short films from Woodfall, edited together to make one. The films are: ‘Ride of the Valkyrie’ (15 minutes), ‘The White Bus’ (45 minutes) and ‘Red and Blue’ (38 minutes) (all 1967). They were directed respectively by Peter Brook (director of Lord of the Flies in 1964), Lindsay Anderson and Richardson himself.

The first and shortest film seems to capture some of the jazz and zaniness of The Knack. It has Zero Mostel playing a world touring opera singer who arrives at Heathrow Airport. He is picked up by a chauffeur (Frank Thornton) and goes through a zany journey between the airport and Covent Garden where he changes into a Brunhilde Valkyrie replete with a spear on his journey. He even ends up chasing a girl (Julia Foster) on the Piccadilly line on his way to Covent Garden.

The next film, ‘The White Bus’ is the best known. Directed by Lindsay Anderson it follows the surreal journey of a depressed young office worker (Patricia Healey) who travels back up to her home town of Manchester and goes on a white bus tour with a variety of other travelers including foreigners (two Nigerians and a Japanese woman), a mace bearer and a Lord Mayor (Arthur Lowe). Here Anderson makes commentaries on British society in this surreal arthouse film that prefigures many elements of his masterpiece he would make the following year, If….  Like If…, this film shares many similar elements from its switching from black and white to colour, it’s social commentary led by social figure heads such as a Lord Mayor (Lowe also appeared in If…) and it’s quirky narrative and even includes an out of place war scene with society disturbed by falling bombs as an audience looks on. The third and final film is the glossy and stylish musical starring Vanessa Redgrave, ‘Red and Blue’. Directed by Redgrave’s then husband, Tony Richardson, this is the most mainstream of the three films, though it is still quirky and odd. With a series of songs (including the sexy Dietrich like ‘Pink Angora’), it is clearly influenced by the films of Jacques Demy (who made The Umbrellas of Cherbourg, 1964 and Les Demoiselles de Rochefort, 1967). In the film Redgrave plays an ingenue who has different amours, including Douglas Fairbanks Jr. and William Sylvester, with her always ending on the losing end.

There is a good deal of talent involved in all these films, many of them having been previously involved in other Woodfall films, other than the first film which does have the sole benefit of starring Mostel. ‘The White Bus’ was written by Shelagh Delaney who had previously adapted to the screen her own play, A Taste of Honey (1962) for Woodfall. The link between the two films is clear with the girl played by newcomer Healy playing a similar type of free spirited character as Jo from A Taste of Honey. As well as Lowe, the film also features a young Anthony Hopkins in a small role in his film debut and was edited by Kevin Brownlow, who at the time of making this film was also working on his own feature debut, It Happened Here (also recently released by BFI).

These films were clearly from another time, experimental films that embody the artistic style of each director. The quirky, even inconsistency of all films may not make them altogether accessible, but Anderson’s film is the stand out, even if it is the most bizarre. There are plenty of contextual extras on the disc, including a somewhat pretentious Making Of documentary made during the shooting of the film, but does go into detail on the filming process and how the project for ‘The White Bus’ came together. There is also a small featurette by Kevin Brownlow of 16mm shooting on ‘Red and Blue’ as well as Brownlow discussing the making of both ‘The White Bus’ and ‘Red and Blue’. There is also a short animated film on the story of Noah narrated by Redgrave.