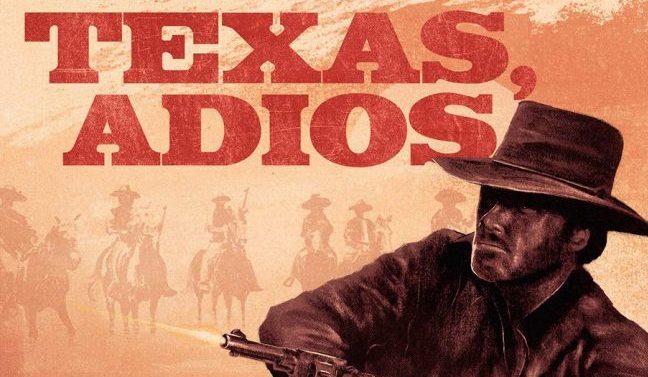 The Italian Western, perhaps more disparagingly known as the Spaghetti Western were highly prolific by 1966 with many being churned out and usually shot, as this film was around Almeria, southern Spain. Of course the films that started this hugely popular cycle of European Westerns were the first two of the so-called dollar trilogy from Sergio Leone and starred Clint Eastwood, A Fistful of Dollars (1964) and For a Few Dollars More (1965). A more unusual and darker Italian Western was made in 1966. Called Django, it starred the good looking blue eyed Franco Nero (in Germany, Texas, Adios was called Django der Rächer). Nero would appear in many of these films and the same year Texas, Adios, now released on Arrow Video.

Texas, Adios is a little different to many others in that it is a little schizophrenic in places: at one moment it is like a typical Italian Western, at others it is one of the more Hollywood like Westerns (on an extra on the disc, Nero thinks this is the closest European Western to the Hollywood genre). At the heart of the film is a revenge story; not an untypical theme in a Spaghetti Western. The plot has two brothers, one, Burt Sullivan (Nero), a sheriff (although he is more like your standard gunfighter) and his younger naive brother Jim (Alberto Dell’Acqua, in the credits called Cole Kitosch) who go in search of the murderer of their father when they were young. They find the killer in ruthless land owner, Cisco Delgado (Spanish actor, Juan Suarez) over the border in Mexico where bandits rule the land committing murder and robberies with the Mexican Revolution taking place in the background. The Mexican Revolution would become a common background theme in the Spaghetti Western.

Directed and co-written by journeyman genre director, Ferdinando Baldi, he has clearly borrowed from Leone and the Hollywood Western here. It does have many of the expected, even cliched tropes of the Spaghetti Western, most notably the flashbacks and close-ups of eyes, the latter well played out on the 2.35:1 transfer where, as in Django, the close-up of Nero’s blue eyes are brightly shown. This stylish trope had been well used by Leone in the drawn out gunfight sequences in the Dollar films and later again in Leone’s Once Upon a Time in the West (1968). Elsewhere the music, by Spaniard Anton Garcia Abril in places sounds distinctly like Ennio Morricone while there is also a sequence with a music box, resembling the musical watch in For a Few Dollars More (1965). There are also several flashback sequences, another trope of the European Western. The flashback was a familiar element in these films, less to Hollywood at the time and before, with Raoul Walsh’s noirish Western Pursued (1947) being a notable exception.

From time to time, Arrow Video have released several interesting choices of Spaghetti Westerns and this film adds to that collection coming right at the start when the Italian European Western was just starting to flood the market and would remain so until the early 1970s (with Keoma, 1976 which also starred Franco Nero coming right at the end of the run). Other Arrow releases have included the Ringo films, the Sartana Collection and Day of Anger (1967). Although Texas, Adios is not a groundbreaker, it did come at an interesting point before the proliferation, copy, print and re-cycle of Italian Westerns.

On the disc there are some decent extras including an appreciation of the film and the context of when it was made by film historian Austin Fisher. There is also an interesting interview with Nero, as well as with co-writer, Franco Rossetti and co-star Dell’Acqua. There is also a commentary by Spaghetti Western experts C. Courtney Joyner and Henry C. Parke.